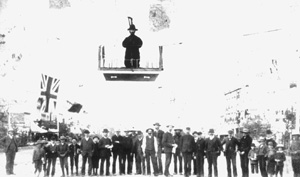 Born on October 22 or 23, 1844, in Red River Colony (Manitoba), Riel was educated in St. Boniface before being sent by Bishop Alexandre Taché to attend the Sulpician College in Montreal in the hope that he would become a priest. Riel was expelled from the college in 1865, after which he wrote poetry, read law, and spent time in the United States.

Returning to Red River in July 1868, Riel quickly became a leader in the agitation that was developing over the annexation of the Northwest. At his urging, the Métis established a provisional government on December 8, 1869, to force Canada to negotiate the entry of the Northwest into Confederation, and he was elected president. In the events that followed, a young Ontario Orangeman, Thomas Scott, was executed by a Métis firing squad, an act that enraged the people of Ontario. To avoid reprisals, Riel fled Red River prior to the arrival of a military expedition, and when the Ontario provincial government posted a fivethousand- dollar reward for the capture of those involved in Scott's death, he sought refuge in the United States.

Riel was elected three times as a member of Parliament for the constituency of Provencher, but he never took his seat and was subsequently expelled from the House of Commons. In December 1875 he underwent a deep religious experience that convinced him he had a special mission to fulfill. Riel's outward manifestations of religiosity resulted in his confinement in asylums in Quebec. Upon his release in January 1878, Riel went to the United States, where he lived with friends. He arrived in Montana in 1880, married a Métis woman, Marguerite Monet dit Bellehumeur, acquired U.S. citizenship in 1883, and taught school at Saint Peter's Mission on the Sun River.

On June 4, 1884, a delegation of Métis from the territorial district of Saskatchewan arrived at the mission to ask Riel to return with them and champion the cause of the people of the Northwest. Riel accepted the invitation and returned to Saskatchewan, where he organized a movement to pressure the Canadian government to redress the grievances of the Northwest.

In the meantime, Riel had religious revelations and claimed to be a prophet with a mission to create a new social order in the Canadian Northwest. On March 19, 1885, Riel formed a provisional government known as the Exovedate, and hostilities broke out a few days later. The Métis eventually were defeated at the village of Batoche, and Riel surrendered on May 15. He was taken to Regina, where he was charged with high treason. He was tried, found guilty, and sentenced to death, despite the jury's recommendation for clemency. Riel was hanged in Regina on November 16, 1885.

His execution contributed to a political revolution in Quebec, strained dominion-provincial relationships, and furthered the division between French and English in Canada. The condemnation of Riel's actions by the Catholic clergy disappointed the Métis and contributed to the emergence of a distinct Métis national consciousness.