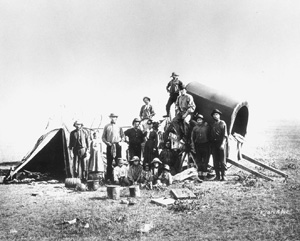 The term "Metis," from the French meaning "mixed," is used by scholars to designate individuals and groups who identify their antecedents with historical fur trade communities, and it refers to people who possess a distinctive sociocultural heritage and sense of selfidentification. These descendants of Native American women and European men forged a new identity that was distinct from Indigenous bands and from the European American world of the trading posts. The Metis of the Great Plains could be found almost anywhere the fur trade predominated, and by the early nineteenth century distinct communities were emerging in the valleys of the North Saskatchewan, Assiniboine, and Red Rivers in British North America and the Missouri River and its tributaries in U.S. territory.

These communities varied considerably, depending on the locality in which they arose, the Native American bands they were allied to, the ethnicity and nationality of the fur trade fathers, and the particular roles they played within the fur trade economy. What they had in common was that they were bicultural communities that functioned as intermediaries or brokers between European American fur traders on the one hand and trapping bands on the other. It was in these interstitial spaces that unique Metis identities were forged. Being Metis had many advantages in these fur trade worlds. It was an ethnic positioning that allowed individuals to cross boundaries separating Native American and European American societies. It allowed for flexibility in selfdefinition, whereby an individual could accentuate those personality and kinship aspects to allow entry into both worlds. Some of these communities used "Metis" to identify themselves, though other terms were used, including Michif, Bois Brules, Chicot, "Half-Breed," and "Mixed-Blood," among others.

Although these Metis bands were found across the Northern Plains from the Missouri to the Athabasca River, Metis political identity in the early nineteenth century was focused on the Red River Settlement. Their assertion of political rights arose there first in relation to the fur trade wars between the North West Company and the Hudson's Bay Company following the establishment of the Red River Settlement in 1811. The Plains Metis, closely tied to the various bourgeois of the North West Company by consanguinity and employment, were encouraged to oppose the Hudson's Bay Company's efforts to impose any authority over them. This conflict, which ended in violence and the deaths of twenty-one colonists at the Seven Oaks Massacre in 1816, came to be seen by the Metis as the initiation of a "new nation."

Acting as buffalo-hunting provisioners and trappers in the fur trade of the Great Plains, the Metis considered themselves independent of both fur trade and tribal control. By the 1840s the buffalo-robe trade, complementing the summer provisioning hunt, resulted in the establishment of sizable winter villages wherever buffalo could be found. This move into the territory of the Sioux, Crees, and Blackfoot caused violent confrontations, the most famous of which was the Battle of Grand Coteau, on June 16-19, 1851. Here Metis buffalo hunters from the Red River came under sustained attack from Sioux near the Missouri River. Attacked by a much larger force, the Metis circled their two-wheeled Red River carts to corral their horses and oxen and to shelter their women and children. The men established a perimeter the distance of a gunshot by scraping gun pits in the prairie sod, and from these rifle pits they inflicted enough casualties that the Sioux eventually broke off the attack.

In order to alleviate such hostilities, attempts were made to broker peace treaties between the Metis and the various tribal groups. In 1858 the Metis, Sioux, and Ojibwas met in a Grand Council north of the Sheyenne River, to the west of Devils Lake (present-day North Dakota), to set tribal boundaries and establish peace among the three groups. The Me;tis, though closely associated with the Ojibwas of the region, were recognized as a separate political and military force and were given the right to hunt in Sioux territory. Still, conflicts would continue to erupt between the Metis and various tribal groups throughout the 1860s and 1870s.

In the treaties negotiated between the United States and Native American groups west of the Great Lakes, various bands insisted that treaties provide some compensation for their "mixed-blood" brothers not living as Indians or as part of the band. When the Red River Metis heard that the American government was planning to negotiate a treaty with the Pembina and Red Lake Chippewas (Ojibwas), many decided to relocate to the American side of the boundary to take advantage of the benefits of this treaty. During the negotiations the Metis claimed that it was their country and that they had long defended and maintained it against the encroachments of enemies. The treaty that was signed between the United States and the Pembina Chippewas on September 20, 1851, however, did not include the Metis as signatories because the government believed it should not treat with people who it regarded "as our quasi citizens." The government negotiator did stipulate that he would not object to any just or reasonable treaty stipulation the Indians might choose to make for the Metis' benefit.

With the transfer of Rupert's Land to Canada in 1869–70, the Red River Metis, led by Louis Riel, initiated a political movement to guarantee their rights in the new political order. The Manitoba Act of 1870, which brought the Red River Settlement into the Canadian Confederation, granted the Metis both land rights and some semblance of constitutional recognition. The rush of settlers into Manitoba after 1870, and the continuing profitability of the buffalo-robe trade, however, induced many Metis to sell their landholdings and move farther west. In 1884 Riel, now claiming to be a religious prophet, led another movement, the North-West Rebellion, aimed at recapturing the political power the Metis had lost in the Red River Settlement. Centered in the communities of the South Saskatchewan River, this movement eventually resulted in armed rebellion against the Canadian state in 1885. The uprising was crushed, and Riel was hanged for treason on November 16, 1885.

Following the North-West Rebellion of 1885 and the demise of the fur trade in the Plains, the Metis lost much of their political influence and cohesiveness. They dispersed northward and westward, with many also fleeing to Montana and North Dakota to escape expected reprisals. There they joined preexisting Metis communities that had been established during the heyday of the fur trade. Although Metis communities survived into the twentieth century in both the United States and Canada, poverty, demoralization, and prejudice against them led many individuals to suppress their biracial heritage and identity. Since the 1970s, however, social, cultural, and political developments that have legitimized ethnicity have produced a renaissance of Metis identity and political activity throughout the Northern Plains and Prairie Provinces. In 1982 the Metis were recognized as one of Canada's Aboriginal Peoples under section 35(2) of the Constitution Act.

Ens, Gerhard. J. Homeland to Hinterland: The Changing Worlds of the Red River Metis in the Nineteenth Century. Toronto: University of Toronto Press, 1996.