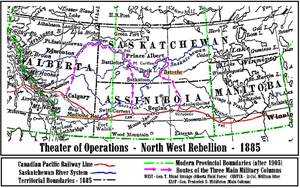 The North-West Rebellion, also known as the second Riel Rebellion or the Saskatchewan Rebellion, took place in Saskatchewan's Qu'Appelle River valley in 1885 and was closely related to the earlier Métis resistance at Red River, Manitoba, in 1869–70.

After the Red River Resistance, Louis Riel fled to the United States to escape arrest. With their leader labeled a traitor, the Métis of Manitoba were now seen by the Canadian government as squatters on potential homestead lands. Stripped of their lands, and seeing few alternatives, the majority of the Métis people moved farther west along the Saskatchewan River system into what is now Saskatchewan and Alberta (then the Northwest Territories).

By 1884 the Northwest was home to several thousand Native and Métis peoples. Joining them were a large number of non-Native settlers, recent arrivals from the Canadian provinces, giving a total population of about 10,000 people. In this period the Northwest Territories were administered by a lieutenant governor appointed in Ottawa and a small council made up of appointed and elected representatives. By 1884 the number of elected representatives on the council numbered only five, and the residents of the region did not have territorial representation in the federal House of Commons or Senate.

In the Prince Albert.Batoche area, the Métis and non-Native settlers alike were discontented. Many of them had moved from the Red River region more than a decade earlier to establish prosperous farms along the South Saskatchewan River. Conflict over land tenure, hunting reserves, government surveys, tariff structures, and frustration from the absence of government representation led the Métis and whites to organize in 1884. As no clear leader emerged, the Métis sent a delegation to Montana to ask Louis Riel to return to unite the English- and French-speaking Native, white, and Métis residents of the region. Riel, now an American citizen, agreed, and he arrived in Batoche amid much fanfare in May 1884. At the same time, the Plains Crees, under the leadership of chiefs Big Bear and Poundmaker, also began to demand the renegotiation of their treaties.

In a move reminiscent of his Red River days, Riel took up the reins to lead the white and Métis settlers, challenging the legitimacy of the Canadian government in the Northwest and proclaiming the formation of a provisional Métis government at Batoche in March 1885.

On March 26 a detachment of the North- West Mounted Police at Fort Carlton (twenty miles from Batoche) sent 100 men to Duck Lake to head off a possible attack and to prevent the Métis from seizing arms and ammunition stored there. Gabriel Dumont and a large group of Métis met the Mounted Police at Duck Lake, and in the resulting skirmish the Métis killed twelve Mounties and wounded another eleven.

The Duck Lake victory (often called the Duck Lake Massacre by non-Natives) rallied the Native troops and convinced the Crees to join forces with Riel. Cree chiefs Big Bear and Poundmaker tried to maintain calm within the tribes, but the Duck Lake victory had emboldened many of the young Cree warriors who laid siege to Fort Battleford on the North Saskatchewan River. On April 2, 1885, a group of warriors from Big Bear's band attacked the Hudson's Bay Company post at Frog Lake, killing nine non-Native men. Within a few days, the Canadian government sent forces to Batoche, Battleford, and Frog Lake. The main force under Maj. Gen. Frederick Middleton took Batoche on May 12, where Riel surrendered on May 15. Poundmaker surrendered on May 12 and Big Bear on July 2.

Immediately upon his capture, the Canadians brought Riel to Regina for trial. On July 31, 1885, the all-white jury convicted Riel of treason, ignoring both his American citizenship and questions regarding his sanity. Despite a huge public uproar in the province of Quebec, Louis Riel was hanged on November 16, 1885. He was followed to the gallows eleven days later by eight of the Cree warriors who had been involved in the North-West Rebellion.

The Métis gained little from the rebellion. Many of their leaders fled to Montana or were jailed. Citizens of the Northwest received representation in Parliament, but the Métis were forced to either assimilate or move still farther to the margins. The Crees, forced to settle their treaty claims as best they could, suãered under the tightened control of western Indian agents and were relegated to reserve lands, where their death rates climbed rapidly and their population fell dramatically over the next five decades.