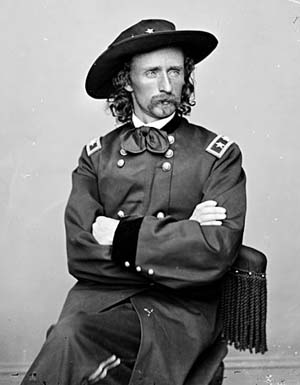 George Armstrong Custer, born in New Rumley, Ohio, in 1839, rose to fame as the "boy general" of the Civil War and achieved immortality by perishing with his entire command at the hands of Lakota and Cheyenne Indians on the Little Bighorn River in 1876. He graduated from West Point at the bottom of his class in 1861 but proved himself a fearless fighting soldier in the Civil War. By the age of twenty-three he was a brigadier general of volunteers in the cavalry corps. In a self-designed uniform sparkling with gold, his long blond hair flying out behind him, Custer was the stuff of legend; by the age of twenty-five he was commanding a division. When the war ended he reverted to his regular army rank of captain, and while he would never regain the lofty rank of major general, he was promoted to lieutenant colonel in the newly formed Seventh Cavalry in 1866. After a fruitless campaign against the Southern Plains tribes over the summer of 1867 that culminated in a court-martial and suspension from duty for eleven months, Custer established himself as an Indian fighter on November 27, 1868, with a controversial victory on the Washita River, Indian Territory, during which the Seventh Cavalry destroyed a Cheyenne village, killing 103 men, women, and children.

Following a stint of Reconstruction duty in Kentucky, Custer accompanied his regiment to Dakota Territory in 1873. He led it in the field that summer on the Yellowstone Expedition, designed to clear the way for the construction of the Northern Pacific Railroad through Sioux country, and the following year on an exploratory probe deep into the Black Hills that turned up gold in paying quantities and created intense pressure on lands ceded to the Lakotas by treaty in 1868. The fallout, the Sioux Expedition of 1876, had as its objective the confinement of "hostile" Lakotas on their reservation. Three military columns took the field, the Seventh riding with the Dakota Column under Gen. Alfred Terry. On June 22 Terry sent Custer ahead with 600 men of the Seventh Cavalry and a contingent of scouts. On the morning of June 25, in sight of an enormous Indian camp on the Little Bighorn River, Custer divided his regiment into four battalions and led the five companies under his direct command–211 men–to total annihilation.

Custer's Last Stand became an enduring myth, and Custer himself has represented everything from fearless self-sacrifice (the martyred hero) to reckless incompetence (the egocentric fool). In 1877 Custer's remains were reburied at West Point, where a monument marks his final resting place, though those still fascinated by his fabled Last Stand make their pilgrimage to the Little Bighorn Battlefield National Monument in southeastern Montana.