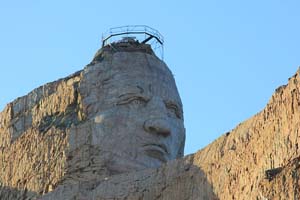 In the Black Hills, on land taken from the Lakota Sioux, stands a 600-foot mountain. This mountain, blasted away for more than fifty years to expose bare granite, is gradually beginning to represent Crazy Horse, an Oglala Sioux leader and warrior. Korczak Ziolkowski, the self-taught sculptor and artist (born in Boston on September 6, 1908) who started this project has died, but his family is working to keep his dream alive.

Ziolkowski's dream began in the late 1930s, when Henry Standing Bear, an Oglala chief, asked him to create a memorial to Native Americans. Standing Bear wrote, "My fellow chiefs and I would like the white man to know the red man has great heroes too." To honor Standing Bear's wish, Ziolkowski decided to erect a monument–ten times larger than Mount Rushmore–to Crazy Horse, who was born sometime around 1840 and led his people in many fights, resisting white encroachment encroachment and refusing to sign treaties. Crazy Horse helped defeat George Armstrong Custer's Seventh Cavalry at the Battle of the Little Bighorn. He was killed at Fort Robinson, Nebraska, in September 1877, reportedly while trying to resist arrest. Crazy Horse remains an important symbol of Native American resistance to European American hegemony.

Ziolkowski dedicated the first blast of the Crazy Horse Memorial in 1948. The monument was just one part of his extensive nonprofit humanitarian project intended to honor Native Americans; Ziolkowski also had intentions to build a museum, university, and medical training center. Only one of his goals ever reached completion, the Indian Museum of North America, which is located below the monument.

The monument can only be what Ziolkowski called a "lineal likeness," since Crazy Horse never allowed anyone to photograph or sketch him. The Crazy Horse Memorial will be the world's largest in-the-round sculpture, measuring 641 feet high and 563 feet long. Four thousand people will be able to stand on his outstretched arm, and below his hand, in three-foot-high letters, a message will read, "My lands are where my dead lie buried."

Although intended to honor Crazy Horse and Native Americans in general, many have questioned the appropriateness of blasting his image out of the sacred Black Hills. According to Virginia Driving Hawk Sneve, Lakotas would rather his image "be cloaked in faceless anonymity to forever symbolize their defeat and the need for inspired leaders once more." However, fifty years after the first blast, Crazy Horse's face was dedicated on June 3, 1998. Some still question whether or not the monument will ever be completed.