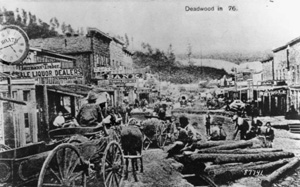 A great aura hangs over Deadwood, a small mining town turned gambling town on the western side of South Dakota in the Black Hills. Its two most famous characters, Wild Bill Hickok and Calamity Jane, spent little time in the town but left their legacy there, as both are buried next to each other in the Mount Moriah Cemetery overlooking the main part of Deadwood. Calamity Jane made this request because of her admiration for a man she hardly knew. The now-permanent partnership provides one of the main tourist attractions in Deadwood.

The name Deadwood resulted from the stands of timber that were prevalent in the area when the first miners arrived in response to reports of gold from Lieutenant Colonel George Armstrong Custer's party in 1874. A century later, despite being designated a national historic landmark in 1961, the town looked set for extinction.

Deadwood was saved by the statewide referendum of 1988, which legalized gaming. Crucial to the "yes" vote was the stipulation that a portion of the proceeds had to be used for historic preservation. As a result, November 1, 1989, marked the renaissance (or demise, in the eyes of gambling opponents) of Deadwood. Evidence of restoration is apparent everywhere, with brick-paved streets, simulated gas lighting, and mostly stone buildings that follow architectural traditions from the period 1880–1940. Trolley buses are a visual reminder of the vehicles that used to run on rails within the town.

Almost 100 casinos compete for the gambling dollars that keep the legacies of characters like Deadwood Dick, Poker Alice, Potato Creek Johnny, and Preacher Smith alive in this iconic survival of the Old West.