LITTLE BIGHORN, BATTLE OF THE 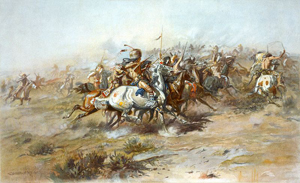 " 'The Custer Fight' by Charles Marion Russell. Lithograph. Shows the Battle of the Little Bighorn, from the Indian side." (1903) (Library of Congress)

On Sunday, June 25, 1876, Lt. Col. George Armstrong Custer led 210 men of the U.S. Seventh Cavalry to their deaths at the Battle of the Little Bighorn. It was the army's worst defeat of the Plains Indian Wars.

The prelude to "Custer's Last Stand" began at the 1868 Treaty of Fort Laramie, which created the Great Sioux Reservation, including the Black Hills, as a homeland for the bands of the Lakotas and Cheyennes. The government's objective was to settle the Indians down on the reservation, where they could be more easily controlled. In 1874 rumors of gold in the Black Hills were confirmed by a geological team accompanying Custer's expedition, and white miners invaded the sacred land. This abrogation of the treaty rights by Americans encouraged the Lakotas and Cheyennes to resist restriction to the reservation and to continue bison hunting on the ranges of Nebraska, Wyoming, and Montana. In December 1875 the United States gave the tribes a thirty-day deadline to return to their reservations or be subject to military reprisals.

In the spring of 1876 the United States launched a three-pronged campaign against the Cheyennes and Lakotas. The first prong, under Col. John Gibbon, marched east from Fort Ellis (near present-day Bozeman, Montana). The second prong, led by Gen. Alfred Terry (and including Custer) headed west from Fort Abraham Lincoln near present-day Bismarck, North Dakota. The third prong consisted of Gen. George Crook's men moving north from Wyoming into Montana. These three units planned to meet near the end of June in the vicinity of the Little Bighorn. Unknown to Terry and Gibbon, Crook encountered the Indians near Rosebud Creek in southern Montana and was defeated by them about a week before Custer's battle. After this, his force withdrew to Wyoming, breaking one side of the triangle. Meanwhile, Terry was moving west up the Yellowstone River to the Little Bighorn. The Seventh Cavalry, under Custer, scouted ahead on June 22. On the morning of the 25th, they reached the divide between Rosebud and the Little Bighorn Rivers. From a spot known as the Crow's Nest, they observed a large Indian camp. Worried the Indians might escape, Custer decided to attack down the valley of the Little Bighorn. Custer assumed his approximately 600-member command would face at the most 800 warriors. Instead he found a camp of 5,000 to 8,000 Indians, with about 2,000 of them warriors.

Custer divided the Seventh Cavalry into three elements during the early phases of the battle and then subdivided his immediate command into wings. The Lakota and Cheyenne warriors, although surprised by the army's attack, quickly rallied and put all elements of the Seventh Cavalry's attack on the defensive. The Indians fought in small, loosely affiliated groups. They used their superior numbers, took advantage of available cover, and sniped at the soldiers from long distances. The soldiers deployed in open skirmish order, as they were trained, with the result that they were widely dispersed and became easy targets for the warriors' guns. Encircled by mounted forces led by Crazy Horse and Gall, Custer's entire command perished.

The news of Custer's defeat reached the American public during the celebration of the nation's centennial. The reaction was outrage and military reprisals that confined most of the Lakotas and Cheyennes to the reservation by the spring of 1877. Following the Battle of the Little Bighorn, the Black Hills were confiscated by the United States in direct contradiction of the terms of the 1868 treaty. The site of the battle is now the Little Bighorn Battlefield National Monument (previously, before December 10, 1991, the Custer Battlefield National Monument).

Scott, Douglas D., Richard A. Fox, Milessa A. Conner, and Dick Harmon. Archaeological Perspectives on the Battle of the Little Bighorn. Norman: University of Oklahoma Press, 1989.