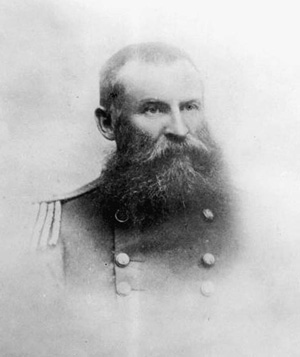 George Crook was born on September 8, 1828, near Taylorsville, Ohio, to Elizabeth Matthews and Thomas Crook, farmers. He graduated from the U.S. Military Academy at West Point in 1852 and served in California and Oregon fighting Indians until 1861. After serving in the Civil War as colonel of the Thirty-sixth Ohio Volunteer Infantry, Crook returned to the Pacific Northwest.

In 1871 the army ordered Lieutenant Colonel Crook to Arizona to quell the Apaches. After a successful campaign, Crook was promoted to brigadier general in 1873. In 1875 he assumed command of the Military Department of the Platte in Omaha, Nebraska.

In December 1875 the government ordered the army to force Lakotas and Northern Cheyennes from the Powder River country to Indian reservations in Nebraska. On June 17, 1876, Crook's Wyoming Column with 1,300 fighting men (including 175 Crow and 86 Shoshone warriors) fought approximately 1,500 Lakotas and Cheyennes led by Crazy Horse in the fierce six-hour Battle of the Rosebud, Montana, where Crazy Horse stopped Crook's advance. Crook and other officers campaigned throughout 1876 and early 1877, destroying Indian villages and disrupting their hunting. Crazy Horse and other nontreaty Lakotas and Cheyennes were compelled to surrender during the spring of 1877.

Crook, who believed that Americans were to blame for the Indian wars, consistently advocated Indian rights. In 1878 the government ordered Crook to arrest members of the Ponca Tribe who had returned to their Nebraska homeland from Indian Territory. Crook, seeing the injustice in this, convinced others to initiate a lawsuit to stay his orders. In the resulting case, Standing Bear v. Crook, Judge Elmer Dundy ruled for the first time in American history that "an Indian is a person within the laws of the United States."

In 1882 Crook returned to Arizona, where he achieved his finest military accomplishment. In 1883 he led nearly 200 Western Apache scouts and about fifty soldiers into the Chiricahuas' sanctuaries in the Sierra Madre of Mexico. After one skirmish, Crook negotiated the Chiricahuas' peaceful return to their Arizona reservation. Crook's superior officer, Gen. Philip Sheridan, publicly criticized Crook's Apache policy, and relations between the two deteriorated to the point that in 1886 Crook asked to be relieved of his command in Arizona. Crook returned to the Department of the Platte until 1888, when he became a major general and was assigned to command the Division of the Missouri, headquartered in Chicago. Crook died there on March 21, 1890. He was survived by his wife, Mary.