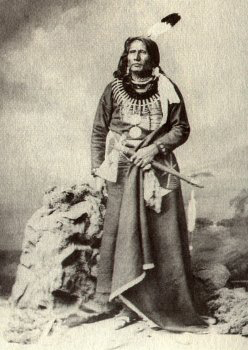 In the Nebraska Hall of Fame in the State Capitol building is a bust of Standing Bear. He is there among other honored Nebraskans because of the pivotal role he played in resisting the United States' efforts to move his people from their homeland and for his victory in a famous trial, which projected American injustices against Native Americans into the public mind.

Standing Bear was born around 1829 in the traditional Ponca homeland near the confluence of the Niobrara and Missouri Rivers. The Poncas sold this homeland to the United States in 1858, retaining a 58,000-acre reservation between Ponca Creek and the Niobrara. In 1865 the reservation boundaries were modified, resulting in a larger reservation that fronted on the Missouri River. On this reservation the Poncas lived a life of deprivation and fear–the United States did little to protect them from attacks from the Brulé Sioux. Furthermore, when the United States created the Great Sioux Reservation in 1868, the Ponca Reservation was included within its boundaries, arguably depriving them of title to their remaining land.

This was the context for the removal of the Poncas to Indian Territory in 1877. Standing Bear was among the chiefs who protested this eviction, and for this he was imprisoned at Yankton in early 1877. But they were forced to move. Standing Bear went with the second, more resistant, group of migrants. On the way, his daughter Prairie Flower died of consumption.

On their new reservation in Indian Territory, the Poncas continued to die in great numbers. Unknown to their agent, Standing Bear and twenty-nine other Poncas had been storing their rations in preparation for the daunting journey back to the Niobrara. They left on January 1, 1879, and trekked through the Plains winter to reach the reservation of their relatives, the Omahas, in mid-March. Standing Bear carried with him the bones of his son to be buried in the familiar earth along the Niobrara.

Again the federal government intervened. Standing Bear and his followers were arrested by order of Gen. George Crook and taken to Fort Omaha, the intention being to return them to Indian Territory. At this point Thomas Henry Tibbles, an Omaha newspaperman, became interested in their plight and secured two Nebraska lawyers to represent them. The lawyers filed a federal court application for habeas corpus to test the legality of the detention. Judge Elmer Dundy, after permitting Standing Bear to make a moving speech, ruled the detention illegal and the prisoners released. Dundy reasoned that Indians were indeed "persons" under the law and entitled to sever tribal connections and to live where they desired.

Standing Bear subsequently toured the eastern United States with Tibbles, arousing support for the reform of federal Indian policy. In the 1880s he lived with his followers in the bend of the Niobrara, farming successfully. They became known as the Northern Poncas, and their lives increasingly separated from the Southern Poncas who had remained in Indian Territory. Standing Bear died in 1908 and was buried alongside his ancestors.

University of Nebraska College of Law

Tibbles, Thomas Henry. The Ponca Chiefs: An Account of the Trial of Standing Bear. Edited by Kay Graber. Lincoln: University of Nebraska Press, 1972.