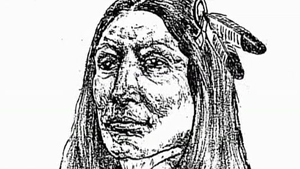 "A sketch of Crazy Horse believed to be accurate. It was drawn in 1934 by a sketch artist interviewing Crazy Horse's daughter, who claimed it was an accurate image."

Crazy Horse was born near Bear Butte, South Dakota, around 1840. He was the son of Crazy Horse, a distinguished Oglala Lakota warrior and medicine man, and Rattle Blanket Woman, a Miniconjou Lakota.

The life of Crazy Horse nearly bracketed the years of violent contact between the Lakotas and the United States. A war chief of the Oglala, Crazy Horse contested American expansion into Lakota lands in the Northern Great Plains. During Red Cloud's War, Crazy Horse demonstrated his military prowess in the Fetterman Fight at Fort Phil Kearny (1866), the Hayfield Fight (1867), and the Wagon Box Fight (1867). The Lakotas' military success persuaded the government to negotiate, and after prolonged discussions Red Cloud and some Lakota chiefs signed the Fort Laramie Treaty of 1868. Crazy Horse and other Lakota leaders, however, refused to acknowledge the treaty.

Crazy Horse's reputation as a war leader earned the admiration of the Lakotas and Northern Cheyennes and of tribal enemies of the Lakotas such as the Crows. His unyielding opposition toward the demands of the U.S. government and toward the reservation regime made him a central figure among the nontreaty Oglala and Miniconjou Lakotas and the Northern Cheyennes, who increasingly looked to him for leadership after 1868. Crazy Horse earned his highest formal honor in 1868 when he was selected as one of the head warriors, or shirt-wearers, of the Oglalas.

Crazy Horse was a shirt-wearer until 1871, when an affair with a married woman (Black Buffalo Woman, Red Cloud's niece) cost him this prestigious position. Crazy Horse kept a sizable following, however, because of his determined opposition to the United States. By the mid-1870s government officials and army officers recognized him as one of the most prominent leaders of the Lakota resistance.

The 1874 discovery of gold in the Black Hills strengthened the determination of the government to purchase the Black Hills, which angered nearly all Lakota leaders, whether they were signatories of the 1868 Fort Laramie Treaty or not. Negotiations between the government and the Lakotas broke down, and in December of 1875 the government ordered Lakota bands living in the unceded areas along the Yellowstone and Powder Rivers to report within six weeks to the reservations or face military action.

On June 17, 1876, Crazy Horse and approximately 1,500 warriors defeated a military column led by Brig. Gen. George Crook on Rosebud Creek in southern Montana. On June 25, 1876, Crazy Horse was involved in the destruction of Custer's Seventh Cavalry at the Little Bighorn. Despite these defeats, the army persevered against the Indians in the Powder River–Yellowstone River region through the winter of 1876–77. On May 7, 1877, Crazy Horse and his band surrendered at Fort Robinson, Nebraska.

His contempt for reservation life notwithstanding, Crazy Horse realized there was no viable alternative for the beleaguered Lakotas. Initially government officials and army officers sought him out, and their attention caused jealousy among Oglala and Sicanju (Brulé) Lakota chiefs, who spread false rumors about Crazy Horse. Junior army officers were persuaded that Crazy Horse was plotting rebellion and they decided to arrest him. On September 5, 1877, during an attempt to imprison Crazy Horse at Fort Robinson, an army sentry bayoneted him. He died a few hours later. He was survived by two wives and no children.