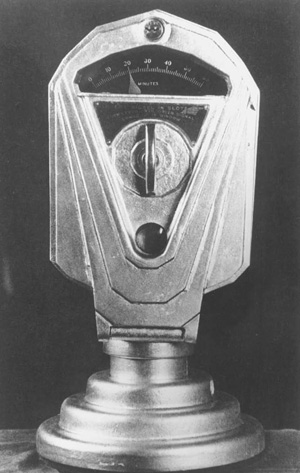 On December 21, 1932, Carl C. Magee of Oklahoma City filed for a patent on the first "coincontrolled parking meter," an invention designed to eliminate a major nuisance of the automobile age, urban parking congestion. Magee, as chair of the Oklahoma City Chamber of Commerce's traffic committee, had been asked to devise an effective method of controlling Oklahoma City's growing parking problem. The capital city was Oklahoma's largest urban area. The city's thoroughfares were used by 10 percent of the state's 550,000 registered automobiles, and all-day workers in the downtown area preempted parking spaces needed by customers of retail establishments. Up to this time, Oklahoma City officials, like those in other large cities, had attached fixed time periods to downtown parking spaces, with traffic officers enforcing the limits by chalking the tires of parked cars and issuing tickets to drivers who parked too long in the same spot. This method proved to be only 5. 10 percent effective.

Magee, a New Mexico newspaper reporter who had arrived in Oklahoma City in 1927 to buy and edit a weekly paper, the Oklahoma News, quickly became involved in civic work and volunteered to "solve" the city's problem. He conceptualized a spring-operated timing device, articulated precise specifications, and in late 1932 filed for a patent. Then, in cooperation with Dean Phillip S. Donnell, engineering professor H. G. Thuesen, and other faculty at the Oklahoma State University College of Engineering, Magee sponsored a design competition. Criteria for the device were simple: it had to be small, attractive, windable, and cheap to manufacture.

Unfortunately, none of the submissions proved entirely usable, and in 1933 Thuesen, in concert with Gerald A. Hale, his former student and an osu engineering instructor, developed the "Black Maria," a spring-wound timing device that followed Magee's concept and met his design criteria. Additional technical work was accomplished by Adolph Schillinger, a machinist from Sand Springs, Oklahoma, and a working model of a manually wound, coin-operated parking timer resulted. In November 1933 Magee filed the patent for this device as well, and in 1935 he incorporated the Dual Parking Meter Company, with himself as president. Refinements were added by the chosen manufacturer, the MacNick Company of Tulsa, makers of timing devices for "shooting" oil wells with nitroglycerin. Magee's third patent, filed on May 13, 1935, was approved on May 24, 1938.

First trademarked as the "Dual" and later as the "Park-O-Meter," Magee's brainchild was adopted by the Oklahoma City council, and in July 1935 175 units were installed in a fourteen-block area of central downtown. Five cents bought an hour's rent on a parking space, and a twenty-dollar fine resulted if the car remained after time expired. Many similar inventions and "improved" models quickly came on the market, creating a thriving industry in Oklahoma and elsewhere. Although its legality was challenged in court, the oft-maligned parking meter was soon adopted by cities across the United States for parking regulation and revenue production.