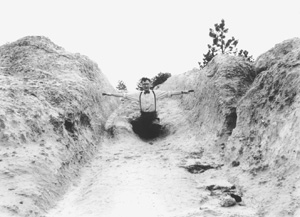 The Oregon Trail began as a fur traders' route across the Great Plains in 1824 with the discovery of South Pass through the Rocky Mountains. The pack trains and, later, the wagon caravans that supplied the mountain rendezvous started up the trail from Independence and Westport Landing in the present-day Kansas City area. They moved northwestward, tracing the Kansas and Little Blue Rivers to the Platte, then followed its southern bank westward across the Plains. Other traffic left Bellevue, south of present-day Omaha, to follow the north side of the Platte to the rendezvous.

The fur trade era had shaded into that of the Pacific Coast migrations by the early 1840s. The first missionaries and emigrants bound for California and Oregon accompanied fur trade caravans, and former mountain men guided the first emigrant trains. These early migrants generally came from the Mississippi River valley, and farm families predominated. Some 875 settlers traveled the Oregon Trail in 1843, and by 1847 the migration across the Central Plains had swelled to 4,000–5,000 people.

Emigrants used all manner of conveyances, though mostly the familiar canvas-topped wagons. These wagons generally had light bodies and flat beds caulked for stream crossings. Oxen pulled the majority of the wagons; mules and horses hauled the rest. Settlers formed themselves into trains and, within trains, into "messes," or a team of travelers sharing a wagon. Various guides for emigrants, available at the points of departure, described in detail what was needed for the trip.

In the mid-1840s American leaders decided that this growing migration merited protection. In 1848 Fort Kearny was founded in the central Platte River valley, and a year later, Fort Laramie was remodeled from the fur trading post, Fort John, near the mouth of the Laramie River. These two major forts offered provisions, postal and blacksmith services, and medical care.

California gold inspired migrations in 1849 and 1850 that dwarfed the earlier migrations. About 50,000 emigrants went overland to Oregon and, mainly, California in the latter year. This new wave featured a greater proportion of single men and husbands traveling without families, seeking quick wealth rather than new homes. These gold seekers generally came from the upper Mississippi River valley and were more urban in origin than earlier travelers. The upriver towns of Weston and St. Joseph, Missouri, joined the Kansas City area as major departure points, as did the site of the first abortive Fort Kearny at present-day Nebraska City, Nebraska. Farthest north, Kanesville (Council Bluffs), Iowa, served an important stream of travel up the north side of the Platte. After a drop in 1851, heavy traffic to California resumed in 1852, this time with more families. Thereafter, migration continued at a more moderate pace, with something like 250,000-300,000 people traveling the trail across the Plains through 1866.

These later migrants followed well-established routes. Several streams of traffic converged east of Fort Kearny in the central Platte River valley. The south-side throng moved west and crossed the South Platte at three main crossings to Ash Hollow and the North Platte valley. The Upper or Old California Crossing involved a descent into Ash Hollow down Windlass Hill. Otherwise, travelers entered Ash Hollow from the east. The road then lay along the south side of the North Platte through Robidoux and Mitchell Passes, which featured trading posts and blacksmith facilities. From the late 1850s the Later California Crossing near Julesburg, Colorado, led to a new route that reached the North Platte at Courthouse Rock. The south-siders made a dangerous crossing of the Laramie River at the fort. Meanwhile, north-siders from Council Bluffs gathered at the site of present-day Fremont, Nebraska, then negotiated the dangerous Loup River crossing. From there they moved up the north side of the Platte and North Platte to join the south-siders at Fort Laramie. By the early 1850s precarious toll bridges and ferries existed at the Fort Laramie crossings. From Fort Laramie, travelers hoped to reach South Pass by around July 4, having ideally left the Missouri River around April 15.

Naturally, months on the road through a sometimes harsh land took a toll on travelers, though emigrant mortality probably did not much exceed that among the general American population. Despite apprehensions, few died at the hands of Plains Indians. Many more died from accidents: mishaps with firearms, drownings, and injuries suffered while driving wagons or handling livestock. Disease, especially Asiatic cholera, by far killed the most.

The trail developed new features as emigration continued. Government mail contracts stimulated increasingly reliable stagecoach service from 1850 on. Military contracts launched large-scale freighting on the trail in 1855. The Pikes Peak gold rush of 1859 created a thriving commerce between Colorado and the Nebraska river towns, which replaced the northwestern Missouri towns as the dominant outfitting and departure points. This new traffic brought about a string of stage stations and road ranches, which, along with proliferating bridges and ferries, eliminated much of the hazard of overland travel.

Abandonment of the Oregon Trail began in 1862. In that year stagecoaches began to follow the new Overland Trail, moving southwest from Julesburg, avoiding Indian depredations beyond Fort Laramie. Emigrant travel followed. The North Platte valley thus became largely a military road, except for new civilian travel bound for the Montana gold fields. In 1866 Union Pacific rails were laid down opposite Fort Kearny, and the great era of the Oregon Trail ended.

Unruh, John D., Jr. The Plains Across: The Overlanders and the Trans-Mississippi West, 1840–60. Urbana: University of Illinois Press, 1979.