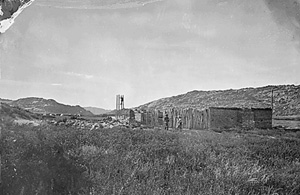 Ruins of Three Crossings stage station along the route of the Pony Express, Wyoming, 1870

The Pony Express was a short-lived fast mail service between St. Joseph, Missouri, and Sacramento, California. In 1855, responding to the desires of his California constituents, Senator William M. Gwin proposed a government-supported express mail service to Congress. Failing to secure congressional aid, Gwin turned to William H. Russell, the lead partner in the overland freighting firm of Russell, Majors and Waddell. After persuading his reluctant partners, Alexander Majors and William B. Waddell, to undertake the risky venture, the enterprising Russell rushed to open Pony Express service.

Preparations were costly. Russell, Majors and Waddell agents bought about 500 of the finest horses and hired approximately 200 riders. Furthermore, they built, outfitted, and staffãed 182 stations along the 1,966-mile route that ran by way of Fort Kearny, the Platte River valley, South Pass, and Salt Lake City. The mail run was ceremoniously opened on April 3, 1860, when riders were dispatched from both ends of the trail.

During its eighteen months of operation the Pony Express carried 34,753 pieces of mail and traveled 650,000 miles. To minimize weight and thus increase speed, letters were written on tissue-thin paper, and the riders were small men whose average age was nineteen. Riders on the weekly service ran twenty-four hours a day year-round. Their fastest time was seven days, seventeen hours, and in the spring, summer, and fall they averaged twelve days, two less than winter. Mail costs were extraordinarily high–$10 an ounce in the early days of the service.

With the completion of the transcontinental telegraph on October 26, 1861, the Pony Express ended. Economically, it was a disaster. The loss of some $200,000 soon propelled Russell, Majors and Waddell into bankruptcy. Despite its financial failure, the Pony Express remains as a major symbol of an often romanticized American West.