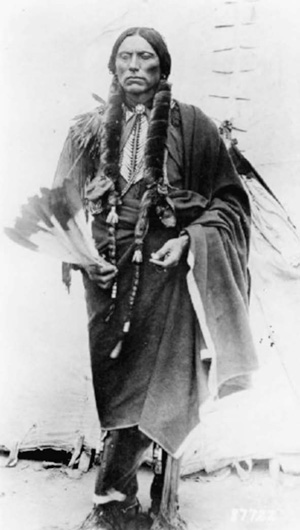 Born between 1845 and 1852 to the white captive Cynthia Ann Parker and the Quahada Comanche war chief Peta Nocona, Quanah Parker grew up within traditional Comanche society, but his later life was marked by a fusion of white and Indian ways. By the time of the 1874.75 Red River War, Quanah had gained such a su.cient following that he helped lead the momentous attack of as many as 700 Comanches, Kiowas, and Southern Cheyennes against the two dozen buffalo hunters and merchants at the Adobe Walls trading post in the Texas Panhandle. The failure of this attack, and subsequent army victories on the Staked Plains, forced all the Comanches and Kiowas to their reservation at Fort Sill in western Indian Territory.

Because of his white ancestry and his willingness to accept reservation life, Quanah attracted the attention of various civilians and military officers at Fort Sill. Agent P. B. Hunt established him as a band chief, with authority to preside over the issuance of beef rations and other annuities. This provided Quanah with significant leverage among his own people, even to the detriment of some of the traditional elders. By 1886 he had been appointed one of the three judges of the Court of Indian Offenses, and he used this position to champion an assimilationist course.

Despite his cooperation with white authorities and his determination to have his people "walk the white man's road," Quanah steadfastly honored many Comanche traditions. He retained his long hair, participated in ancient ceremonies, spoke mostly in the Comanche language, and preserved the right of polygamous marriage. The fact that he had eight wives, five of them at one time, angered some important whites, and in 1898 this cost him the coveted position of Indian judge. Significantly, however, he won his battle to serve as a leader of the peyote religion that was expanding rapidly among his people.

Even though Quanah drew most of his authority as "principal chief" from whites, his popularity among Comanches also increased, especially because of his diplomatic skills in negotiating leasing agreements with Texas cattlemen. Although many tribal members initially had opposed the leasing of tribal grazing lands, the collective income soon guaranteed majority support. The greatest challenge to the reservation began in 1892 when the Jerome Commission called for the allotment of tribal lands into individual holdings and the sale of all surplus acreage to white settlers. Quanah made repeated trips to Washington dc to fight this assault on the collective land base and Comanche sovereignty, but, yielding to the inevitable realities, he negotiated the best terms possible and accepted the allotment process in 1900.

Throughout the years of reservation life, Quanah Parker closely aligned his personal interests with those of the broader tribe. He received money and other gifts from Texas cattlemen, lived in the spacious "star house" built by their largess, fenced several thousand acres of tribal land for his own cattle herd and to rent to whites, and rewarded supporters and family members with reservation jobs through supportive agents. Yet no one could doubt that Quanah had gained more benefits for the tribe then any other leader of the era. He died on February 11, 1911. His funeral at Lawton, Oklahoma, was the largest ever held in that region, and was well attended by respectful Indians and whites alike.