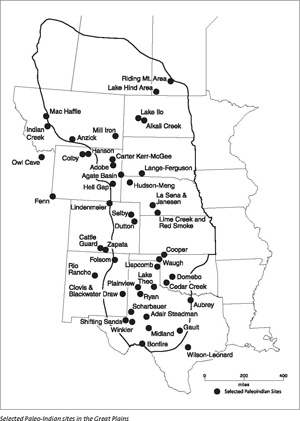 Paleo-Indians were the earliest people to inhabit the Americas. Between 30,000 and 11,000 years ago, small, highly mobile groups of hunter-gatherers extended their hunting areas throughout Beringia (the landmass that joined Siberia and Alaska) and into the Western Hemisphere. This "bridging landmass" emerged slowly from beneath the Bering Sea as more than nine million cubic miles of glacial ice accumulated over southern Alaska, Canada, Labrador, and Greenland. About 20,000 to 18,000 years ago an immense "ice dome" (the Laurentide glacier) towered more than one mile over present-day Hudson Bay. Two lobes of ice spread southward over the eastern edge of the Dakotas and deeper into the Midwest. The Central and Southern Great Plains remained unglaciated at this time, yet the mountains of glacial ice to the north exerted pronounced influences upon the everyday lives of the Paleo-Indians throughout the region.

Archeologists believe that Paleo-Indians expanded into certain ice-free areas of North America's interior, or along its coastal margins. The timing of the arrival of Paleo-Indians in the Great Plains and in North America, in general, is under renewed investigation. Recent genetic studies based on mitochondrial DNA suggest that a founding population composed of four distinct genetic lineages appeared in the Western Hemisphere between 37,000 and 23,000 years before present (B.P.). It appears that all contemporary Native Americans are descendants of these Paleo-Indian lineages, including the hunter-gatherers who made their appearance in the Great Plains 18,000 years ago or earlier.

During the last Ice Age, the Great Plains was inhabited by a diverse array of animals, including the Columbian mammoth, musk oxen, caribou, horse, camel, bison, elk, lion, wolf, arctic ground squirrels, arctic shrews, and lemmings. Around 14,500 B.P. the Northern Hemisphere began to warm and the glaciers began to shrink. The ice over North America essentially disappeared by 6,500 B.P. Mosaic communities of plants and animals were reshuÄed and sorted into their characteristic zonal patterns of today. Many large herbivorous and carnivorous mammals were unable to make the necessary shifts in diet, reproduction, and morphology and became extinct between 12,000 and 10,000 B.P. Some scientists have attributed the disappearance of many larger mammals to the superior predatory abilities of the Paleo-Indians themselves. There is little reason to believe that Paleo-Indian hunter-gatherers had any significant role in these global animal extinctions; such extinctions had occurred many times before, particularly during abrupt shifts from colder glacial to warmer interglacial periods.

The most abundant physical evidence for Paleo-Indians in the Plains consists of a diverse array of carefully made chipped stone projectile points that were given geographical placenames like Clovis, Goshen, Folsom, Midland, Plainview, Cody, Alberta, Hell Gap, Scottsbluff, and Eden. Hunting weapons were probably constructed from interchangeable parts that were frequently repaired and recycled. Certain chipped stone points (e.g., Clovis, Folsom, and Goshen) were attached to short, fletched "dart" shafts and thrown with the use of a leverlike spear thrower, or atlatl. Paleo- Indian flint knappers developed an extremely efficient eleven-step method for transforming a large flake of high-quality stone into a multipurpose cutting implement and, later, into a Folsom point, two "razor blades," and a "lathe" tool. Larger stone points (e.g., Scottsbluff, Hell Gap, and Alberta) functioned as thrusting spears for dispatching bison that had been driven into natural traps created by parabolic sand dunes, deep gullies, or snowdrifts. Paleo- Indian tool kits also included chipped stone tools required to skin and butcher game, scrape skins and hides, and fashion specialized tools and component parts (e.g., foreshafts, shaft straighteners, and delicate eyed needles) of bone, antler, ivory, and wood.

One of the first documented discoveries of Paleo-Indian stone tools found together with the bones of extinct Ice Age animals in North America was made by H. T. Martin and T. R. Overton in 1895 near Russell Springs, Kansas. A similar find was made by George McJunkin–a cowboy, naturalist, and former black slave–in 1908 near Folsom, New Mexico. But it was not until August 29, 1927, that a fluted spear or "dart" point (Folsom) was found by archeologists among the bones of extinct bison (Bison antiquus) at McJunkin's Folsom site. Paleontologists, archeologists, and anthropologists were called to inspect this find in its undisturbed context, and only then did the scientific community agree that humans had lived contemporaneously with these now-extinct animals at the end of the last Ice Age.

These accidental finds sparked the initial systematic studies of the Paleo-Indian presence in the North American Great Plains. In the 1930s Clovis projectile points (dated 11,200–10,900 B.P.) were found with the remains of extinct Ice Age elephants (mammoths) and also bison near Clovis, New Mexico. Later Paleo-Indian occupations (10,000– 8,800 B.P.), including the Cody complex on the Northern Plains and the Firstview complex on the Southern Plains, featured a number of chipped stone projectile points. With the development of radiocarbon dating in the 1950s, as well as the excavation of "layer-cakelike" sites at Blackwater Draw, New Mexico, and Hell Gap, Wyoming, archeologists outlined the time frame for Paleo-Indian life in the Great Plains that is used today.

Researchers have also intensified their efforts to revise and to reformulate their reconstructions of past environments and Paleo-Indian life. Archeologists had generally assumed that the Great Plains during the late glacial period supported a widespread boreal forest composed predominantly of spruce trees. This spruce forest reconstruction is not supported by a fossil record that is dominated by grazing and browsing mammals. Also, paleoecologists now suggest that much, if not all, of the spruce and pine pollen was not endemic and had actually been deposited over the Plains by westerly winds.

Recent studies suggest that Paleo-Indian hunter-gatherers, specifically Folsom people, lived in small, multifamily groups. These groups or hunting bands may have established from twelve to thirty-six camps per year throughout an area of more than 52,000 square miles (slightly less than the area of North Dakota). Folsom-age projectile points have been found more than 300 miles (500 km) from their geological source. It appears that Paleo-Indians quickly located sources for the highest-quality tool stone in the Plains, including Knife River flint (western North Dakota), Niobrara jasper (Nebraska), and Edwards chert (Texas).

The Great Plains has played, and continues to play, a central role in the study of Paleo- Indian lifeways in the Western Hemisphere. Recent work by Steve Holen (Nebraska State Museum) at mammoth death sites may push the initial human occupation of the Great Plains back to more than 18,000 years ago. Such recent research also suggests that the earliest Paleo-Indians may have scavenged food from large mammal carcasses. Archeologists are making use of refined radiocarbon dating methods and more dynamic views of prehistoric technology to reassess the static Paleo- Indian "culture histories" that once dominated their thinking. Archeologists working in the Great Plains have now begun to bring the faint outlines of Paleo-Indian existence into better focus.