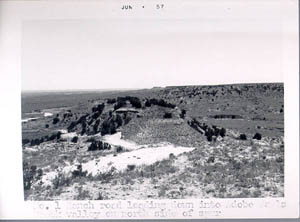 Photograph caption: "No. 1 Ranch road leading down into Adobe Walls Creek valley on north side of spur"

This battle between buffalo hunters and approximately 700 Comanche, Kiowa, and Southern Cheyenne warriors resulted in an Indian defeat, one among several during the course of the large-scale military operation known as the Red River War of 1874-75. Inspired by a recent Sun Dance and Comanche medicine man Isatai's promise of easy victory, the warriors sought to inflict a mortal blow against the hated buffalo hunters who were destroying the vast southern herds in the Texas Panhandle. The young Comanche Quanah Parker joined Isatai as nominal leaders of the raid against the twenty-eight men and one woman residing in Adobe Walls, a small complex of trading stores and a saloon in presentday Hutchinson County, Texas.

During the early dawn hours of June 27, 1874, the Indians attacked the residents, quickly killing two hunters who were sleeping in a wagon. The others were alerted immediately because they had remained awake during the night while repairing a broken beam in the saloon. They held off several assaults, losing only two other defenders–one to Indian gunfire and one to the accidental discharge of a rifle. The siege continued for five days. Indian casualties mounted to several dozen, and faith in Isatai's power faded. On the second day of the siege, Billy Dixon fired his fabled shot, hitting a mounted warrior fully eight-tenths of a mile away. Following abandonment of the Adobe Walls settlement six weeks later, the Indians burned it to the ground. Yet the battle had been a bitter setback for them, and it presaged the larger defeat that would soon follow at the hands of the army.