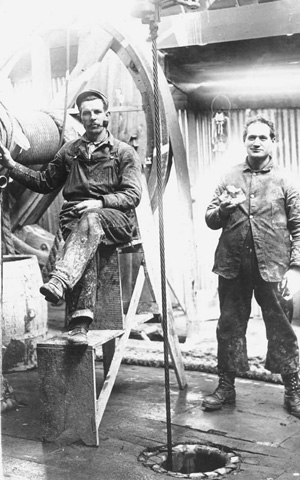 The drilling floor of a cable tool-drilling rig

Roughnecks, skilled members of drilling crews, are employed in the drilling of oil wells. Once the wells are put on-line, roughnecks hurry to find work in the next oil strike. Roustabouts, unskilled laborers, also follow the oil booms; however, they often take work outside of drilling operations and sometimes became more permanent oil-town residents. Many from both groups are young and unmarried men who work hard and spend their money with abandon to relieve the monotony of the work and the often wretched living conditions. Lured by the excitement and adventure of "black gold," they have long migrated from one strike to another throughout the Great Plains, from the Rio Grande of Texas north to the Prairie Provinces of Canada and from the midcontinent region of Oklahoma and Kansas west to the Rocky Mountains. Icons in literature and motion pictures, roughnecks and roustabouts in oil boomtowns such as Whizbang, Borger, Artesia, and El Dorado replaced the earlier cowboys of Abilene and Dodge City, prospectors from Custer City and Deadwood, and bullwhackers on the Santa Fe Trail and the Platte River Road in the lore of the Great Plains.

A roughneck is expected to handle a number of tasks. He could be a bit dresser in charge of repairing and sharpening drill bits; a brakeout man, who adjusts the heavy tongs used to loosen pipe joints as they are pulled out of the hole; a cathead man in charge of the winch head on the draw-works countershaft of a rotary rig; a chain slinger, back-up man, or C-slinger, who handles the tongs used to hold the lower section of drill pipe while the upper section is unscrewed; a tool dresser or toolie, who assists the driller and keeps the tools in good repair; a floorman or slip puller, who performs general tasks on the floor of a derrick; a lead-tong man, pipe stabber, or pipe racker, who handles the lead tong and stacks pipe. An inexperienced roughneck is known as a farmer. The tool pusher, also called a stud horse, stud duck, or stud terrapin, is in charge of the roughnecks on a drilling crew.

A roustabout, also called a gaffer, assists the drilling foreman with tasks such as feeding fuel to boilers on cable tool rigs or performs general work around producing oil wells and oil company property. A head roustabout is the name given to a district superintendent who oversees several drilling rigs.