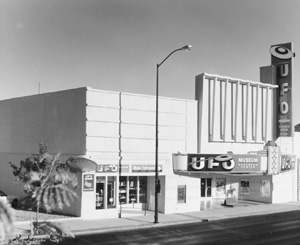 In early July 1947, an event so spectacular that it sent a shock wave throughout the world occurred in Roswell, New Mexico, and yet another image became associated with the Great Plains. The July 8, 1947, issue of the Roswell Daily Record announced: "RAAF Captures Flying Saucer on Ranch in Roswell Region." The article referred to the capture of alien bodies and an alien spacecraft that supposedly crashed just outside of Roswell. The following day the Roswell Daily Record reported that the military had emptied the saucer of its occupants. The Roswell Army Airfield first reported capturing a flying saucer and then recanted the story, replacing "flying saucer" with "weather balloon." The U.S. government still maintains that no aliens were found in Roswell.

Walter Haut and Glenn Dennis were active participants in the 1947 event. Walter Haut was the public relations officer assigned to the Roswell Army Airfield. Acting under orders, he reported the initial incident to the Roswell Daily Record. Glenn Dennis was the local mortician. Someone from the airfield contacted Dennis and asked him how to preserve a body that had been exposed to the elements and also inquired about the quantity of child-size coffins he had on hand. His curiosity piqued, Dennis traveled out to the airfield to see what was going on. Upon his arrival at the airfield hospital, he discovered chaos. When he began to ask questions, he was physically escorted out of the building. Later that day he met with a friend, a nurse from the hospital, and she told him she had seen aliens. She even drew him a picture on the back of a prescription pad. Her drawing has become the standard image of aliens: short, thin, gray in color, with large heads, no hair or ears, large almond-shaped eyes, holes for a nose, a slit for a mouth, and hands with four elongated fingers and suction cups on the inside tips.

The International UFO Museum and Research Center in Roswell, New Mexico, cofounded by Haut and Dennis, focuses on these events and invites visitors to make up their own minds about what really happened.