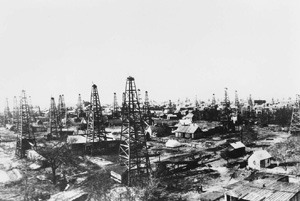 Within a year of completing the first successful crude-oil well in northwestern Pennsylvania in 1859, opportunists from eastern states were drilling for oil in the Great Plains. Using tools and techniques honed in the central Appalachian area, some of these early oil seekers focused their efforts on natural seeps that occurred near the town of Paola in east-central Kansas. Though early wells were unsuccessful, persistence paid off, and in 1893 there was a promising oil discovery near Neodesha, Kansas, that would grow into one of the first commercial oil fields of the Great Plains. Realizing the petroleum potential of the Neodesha area, Standard Oil Company opened a refinery there in 1902 to process the crude oil. This early refinery, though clearly significant to local economic development, was also symbolically important to the region. The refinery sent a strong signal to prospectors that oil had the potential to become one of the economic foundations of the Southern Great Plains.

Oil and gas fields are volumetrically significant accumulations of hydrocarbon that have pooled naturally in the crust of the earth. The geographic position of these accumulations beneath the U.S. and Canadian Great Plains is due to a coincidence of a number of geologic factors. Among these are a hydrocarbon source rock (usually a shale from which the liquid is initially derived) and a reservoir to house the oil (usually a porous sandstone or limestone layer). Another important factor is a migration pathway for the hydrocarbon to move from the source rock to the subsurface reservoir rock. If one of these factors is absent or incompletely developed, an oil field will not form. Consequently, the present-day distribution of commercial oil and gas fields in the Great Plains is a reflection of where the coincidence of these factors has been most favorable.

Hydrocarbon source rocks are a case in point. The hydrocarbon source rocks present beneath the Great Plains are a reflection of the configurations of at least two ancient inland seaways that extended throughout the Plains and Rocky Mountain regions of North America. Thick intervals of organic-rich mud settled to the bottom of these ancient seaways. Deep burial of this mud within the crust of the earth helped to transform the mud into shales with potent oil- and gas-generating potential. At just the right combinations of temperature and pressure and at different locations throughout the Great Plains, oil was released from these source rocks. Geologic conditions in the Southern Great Plains were especially conducive to the accumulation of hydrocarbons. Consequently, due to differences in geology, discovery dates of commercial quantities of oil differed greatly from state to state.

The earliest commercial oil operation in the Great Plains was the Florence field in Colorado. Though oil was discovered at this site in 1862, it was not until the 1880s that both consumer demand and infrastructure were adequate for Florence to become a commercial oil field. Then, following the Neodesha, Kansas, success of 1893, exploratory wells were tapped in surrounding counties in Kansas and Oklahoma. The completion of the Nellie Johnstone No. 1 well in 1897, situated east of the newly founded city of Bartlesville, Indian Territory, marked the first commercial oil well in present-day Oklahoma. Oil production from the Oklahoma Indian Territory o.cially began in 1901. By the time Oklahoma achieved statehood in 1907, the Southern Great Plains was well on its way to becoming recognized as a major petroleum province.

The Northern Great Plains was not to be outdone. At about the same time that the mid-continent area (North Texas, Oklahoma, and Kansas) was coming into its own, a significant volume of oil was also being produced at Salt Creek field, Wyoming's first major Plains oil field. Natural surface seepages had been noted as early as 1889, and the field became commercially viable in about 1908.

Back in the Southern Great Plains, a North Texas oil boom commenced with discovery of the Electra field in 1911, located to the west of Wichita Falls, Texas. This was followed by numerous other large oil field discoveries between 1911 and 1920 in North Texas, Oklahoma, and Kansas. Many of these oil field discoveries resulted in the rapid development of new town sites or the growth of existing nearby town sites. New oil fields in Texas included Ranger, Breckenridge, Burkburnette, and Northwest Burkburnette. New Oklahoma fields were Cushing, Healdton, Garber, Hewitt, and Burbank. The most impressive new fields in Kansas were Augusta and El Dorado. During this period of rapid oil field discoveries, the Midcontinent was producing 30 percent of the total U.S. crude oil. This total had grown to 56 percent by 1920. In response to these exploration successes, a new pattern of railroad and pipeline transportation systems emerged to support the production, refining, and distribution of crude oil within the Southern Great Plains and to areas located outside of the Great Plains. By 1920, according to the Oklahoma Geological Survey, Oklahoma's crude oil was being processed in about seventy refineries in Oklahoma and surrounding states.

Despite these successes, the consumption of petroleum products after World War I had increased so dramatically that the production and distribution capacity was strained beyond limits. Refiners were unable to obtain adequate supplies of crude oil, and some gasoline stations had to close shop for days at a time. On the heels of this demand for crude oil, Charles N. Gould, former Oklahoma state geologist, discovered one of the world's largest oil and gas districts in the Texas and Oklahoma panhandles– the Panhandle field–in 1920.

Following the success of the Florence and Salt Creek fields, other significant oil field discoveries were made in the Northern Great Plains states. However, due to fundamental differences in geologic history, fewer commercially viable fields occur in the Northern than in the Southern Plains. In Montana, the Kevin- Sunburst field, located north of Shelby, was discovered in 1922. The Cutbank field, near Cutbank, Montana, was opened in 1934. In Nebraska, the first successful oil field in the eastern portion of the state was discovered in 1940 at Falls City in Richardson County. In western Nebraska, the first commercially successful well was the Mary Egging No. 1, drilled in Cheyenne County in 1949 by Marathon Oil Company (then known as the Ohio Oil Company). This and adjacent wells were christened the Gurley field. Significant oil production from the Williston Basin of North Dakota began in 1951 with the completion of the Clarence Iverson No. 1 well, located near the towns of Tioga and Minot. In South Dakota, some oil production commenced in 1954 with the discovery of oil in Harding County, located in the northwestern corner of the state.

This regional production, of course, was taking place against a backdrop of the world context of global supply and demand. Following the Panhandle field discovery, coupled with production from other Great Plains fields and other oil-rich regions across America, the United States and the Great Plains entered a period from 1921 to 1940 of petroleum overabundance. Annual production in the United States in 1920 was 443 million barrels and was in balance with demand. By 1923 the volume had expanded to 732 million barrels per year, and the bloated industry headed into a tailspin. Fortunes were lost and dreams crushed during a time that overlapped the Great Depression. From 1945 to 1973 the industry slowly recovered through maintenance of a managed balance between supply and demand. Then from the Arab oil embargo in 1973 to about 1983, the petroleum industry of the Great Plains rode a wave of high oil prices fostered by global fears of oil-supply shortfalls. In 1986, however, oil-rich Saudi Arabia began to increase production in order to gain more control over supply and pricing. This action created an overabundance of oil and placed downward pressure on oil prices. From about 1984 to the present, the petroleum industry has undergone unprecedented global contraction. Emphasis on cost savings has forced the major North American companies to consolidate their operations in Houston, Texas, and Calgary, Alberta. Consequently, the remaining oil and gas wealth of the U.S. Great Plains is mainly the domain of independent investors and the small- to medium-size companies of the region.

The contraction of the industry has been very hard on the economies of the oil field towns that grew up around the industry. For instance, during the oil boom of the seventies, the Permian Basin city of Midland, Texas, was rumored to have more millionaires per capita than any city in the United States. At the beginning of the twenty-first century, however, unemployment there hovered at 9 percent. Economic growth in most of the oil towns in the Southern Great Plains was momentarily stunted by this downturn in the energy industry. Northern Great Plains cities such as Casper and Gillette, Wyoming, and Williston and Dickinson, North Dakota, have also grappled with this economic challenge.

In the early twenty-first century, the Great Plains oil and gas producers compete on a global stage where market forces and oil-rich countries continue to determine the profitability of the industry. Giant multinational companies and the wealthiest petroleumproducing countries are well poised to take advantage of the latest computer-related technology for the exploration and production of hydrocarbons. These technologies have helped to lower finding costs from $15 per barrel in the 1970s to less than $5 per barrel in 2002. Some of these technologies such as 3d seismic (allowing clearer images of subsurface rocks) and improved drilling methods (directional-drilling capabilities) have helped to lower finding costs in the Great Plains.

In the future, one segment of the industry that may witness continued growth in the Great Plains is the natural gas industry. Natural gas, an environmentally friendly alternative to oil and coal, is growing in importance as an energy source of choice. The rocks of the Great Plains still contain an ample supply of this untapped resource.