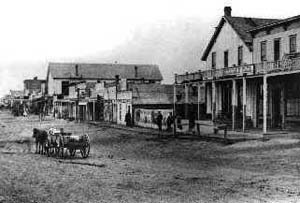 Untold millions have formed their views of the Old West from American movies and television series. The global popular culture spawned by Hollywood now includes an unassailable belief that the region was uniquely murderous, and no locale holds more importance in this popular belief than frontier Dodge City, Kansas.

Today the name of the town that flourished as a Texas cattle market from 1876 to 1885 is widely employed as a cultural metaphor for homicide, anarchy, and depravity. Yet only fifteen adults died violently in Dodge during its cowboy years. In two livestock seasons and probably a third, no adults died violently, and only once did the annual number reach as high as five.

But before becoming a cattle town Dodge had served as a center for the buffalo-hide trade. During its first year its governmental organization was tied up in court. Lacking formal law enforcement, Dodge suffered sixteen to nineteen violent deaths. By mid-1873, however, its county had been organized and a sheriff elected. Not until 1878 is another adult homicide known to have occurred. By then lawmen headquartered there consisted of a deputy U.S. marshal, a sheriff, an undersheriff, as many deputy sheriffs as needed, a city marshal, an assistant marshal, as many policemen as needed, and two town constables. This formidable deployment and the enforcement of gun control largely explain the low body count.

Nevertheless, the anarchy of Dodge's first year lived on in the popular imagination, kept alive by dispatches to eastern newspapers by visitors. Dodge's own lawyer-journalist, Harry Gryden, also exploited its notoriety in such magazines as New York's Police Gazette. He proved instrumental in creating the media attention that made Wyatt Earp and Bat Masterson celebrities. During the "Dodge City War" (1883), news stories printed in the Chicago, New York, and other eastern papers reinforced Dodge's national image as the "Sodom of the West."

Gryden died in 1884, but Dodge's business community carried on in his spirit, hosting the first "genuine Spanish bullfight" held on American soil–a stunt eliciting moral outrage and news coverage from around the nation. It also formed the Dodge City Cowboy Band, professional musicians masquerading as off-duty cowhands who played to enthusiastic audiences in St. Louis, Chicago, and Minneapolis. But with the end of the Texas cattle trade, Dodge's fame declined.

Popular writers occasionally renewed Dodge's name recognition in such mass-circulation journals as Everybody's Magazine, the Saturday Evening Post, and Time. But it was the publication of Stuart N. Lake's bestseller Wyatt Earp: Frontier Marshal (1931) that proved decisive in transforming Dodge into a modern tourist destination, a position it has retained to the present. Beginning with the movie Dodge City (1939), a number of films collaborated with this effort. More influential was the long-running (1955-75) television series Gunsmoke, which gave rise to the metaphoric Dodge among U.S. service personnel in Vietnam: to "get out of Dodge" meant to vacate a dangerous area.

The public perception of Dodge seems unchanged today. Probably of most continuing influence has been "Bloody Dodge City" (1992), an episode of the TV series The Real West. The program emphasized violence and ignores the old cattle town's paltry body count. A combination of national media attention and the town's energetic self-promotion ensures that the Dodge of myth and metaphor is here to stay.