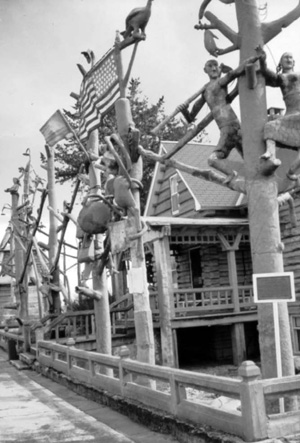 What most people mean by "roadside attraction" is a site that has in some way been "framed" and consciously presented to a public audience for visitation and viewing. It is a "roadside" phenomenon both in the obvious sense that it exists in some proximity to regular routes of public movement and in the sense that it has the particular capacity to draw, at least briefly, a traveler's attention away from the goal of reaching an intended destination. The modern roadside attraction has precursors in such features as wayside chapels along pilgrimage routes and sales exhibits of regional souvenirs along early railway lines (as in some of the Harvey House hotels on the Santa Fe Railroad), but it is primarily a creature of the modern highway and road system. Although roadside attractions are components of a touristic landscape, they are in most cases not primary destinations for recreational travelers. Characteristically, such attractions evoke spontaneous reactions and relatively brief stops rather than preplanned and extended visits.

There are many locations that might or might not be considered a roadside attraction, depending on the qualities one chooses to emphasize. The Great Plains has one of the most notable such cases in Mount Rushmore National Memorial, located in the Black Hills of western South Dakota. While some might argue that its social status as a premier National Park Service site disqualifies it as a "mere" roadside attraction, a good case could also be made that it is the epitome of this landscape genre. The monumental sculptures are elaborately "framed" for viewing and have no other purpose than to induce wonder and perhaps even awe. At the same time, Mount Rushmore is not the primary destination for at least most long-range travelers, and a couple of hours at the site is probably the limit for the typical visitor.

Mount Rushmore has one other quality that links it to the less-spectacular roadside attractions of the Great Plains and elsewhere. Central to its appeal is its inherent strangeness. The uncanny apparition of the gigantic presidential visages in a "wilderness" context is, depending on one's tastes, sublime, inspiring (even religiously so), bizarre, tacky, kitschy, or even frightening or repulsive. Roadside attractions in general are typified by some form of exceptional strangeness or landscape dissonance, though few to the degree of this national monument. It is this quality that sets roadside attractions apart from some other features of the landscape that might prompt travelers to pause, such as scenic overlooks, historical markers, or war memorials. As moments of arresting strangeness, roadside attractions may be human constructions, like Mount Rushmore, or natural features, like the nation's first national monument, Devils Tower, in northeastern Wyoming, a strikingly uncanny geological formation.

These two monuments are particularly grand examples of one subset of such attractions– the officially endorsed or civic sites that sometimes become signature emblems of the communities that maintain them. The Corn Palace in downtown Mitchell, South Dakota, is a more modest and so perhaps a better representative of this type. With fantastically orientalist architecture and an exterior covered in annually changing murals made entirely of South Dakota corn, seeds, and grains, the building functions mainly as a civic auditorium, sports arena, and agricultural exposition site.

Along with these more or less official attractions, two other types may be distinguished, the commercial and the folk or vernacular. Commercial roadside attractions are perhaps the most pervasive form of this landscape characteristic and the type most associated with the term in the popular imagination. The notion of the "tourist trap," suggesting hokum, hucksterism, and crass commercial interests, is evoked by many sites of this sort, giving them an air of tawdriness and sly deceit. The nineteenth- century dime museum and the carnival sideshow are precursors to this brand of attraction, and the rhetoric of excess–the biggest, the oldest, the first, and so on–is especially prominent in them. Many Plains towns have built gigantic animal sculptures to attract travelers. Jamestown, North Dakota, has a sixtyton concrete buffalo, reputed to be "the world's largest." Not to be outdone, New Salem, North Dakota, takes pride in "Salem Sue," the world's largest Holstein cow, and in the same state the town of Dunseith is the home to "W'eel," the world's largest turtle. While many travelers perceive such sites only as roadside clutter and tasteless purveyors of garish come-ons, for others they have an appeal as nostalgically seedy alternatives to the plastic, franchised, strip-mall-studded roadside landscape that has become increasingly pervasive in the Great Plains, as elsewhere in North America.

In some cases, sites of this sort have become so notable and elaborated as to transcend the dubious associations of their origins. Wall Drug–now virtually a town unto itself–is perhaps the most famous instance of this phenomenon in the region. Located, like the Corn Palace and Mount Rushmore, along the Interstate 90 corridor in South Dakota (one of the most fertile routes for roadside attractions in the Plains), Wall Drug is especially famous for its novel advertising strategy of posting mileage signs at remote locations around the country and even abroad.

A third subset of roadside attractions includes those sites that arise in vernacular or folkloric contexts and from primarily personal rather than commercial or civic motivations. In many cases they are the products of individual obsession, hobbyist enthusiasm, or private commemoration, and they frequently reflect a folk art aesthetic of playful bricolage. While many such sites remain fairly obscure and available mainly to local travelers, those that become known to a wider public do so, at least at first, more by word-of-mouth communication than by conscious design and advertising. Often produced from inexpensive, low-tech, or recycled materials and with skills learned on the job or through a hobby, such sites become true roadside attractions to the degree that they achieve sufficient flamboyance and public visibility to set them off dramatically from the surrounding landscape.

One of the best-known and most interesting sites in this category is the "Garden of Eden," located in a residential neighborhood of Lucas, Kansas. Growing to remarkable proportions over the years from 1905 until the death of its creator in 1933, the Garden of Eden was produced by Samuel Dinsmoor as a monumental folk sculpture display devoted to biblical and early-twentieth-century political themes (e.g., antitrust advocacy). With its large figures constructed of concrete and overlaid with a sculptural layer of limestone plaster, the Garden is one of the masterpieces of this surprisingly common genre of display environment. It is an excellent example of a personal vision reaching sufficient proportions and notoriety to become one of the premier roadside attractions of the Great Plains.

It is debatable whether the Great Plains is better supplied than other parts of North America with sites of the sort described here. However, it does seem that such instances of cultural strangeness and landscape dissonance stand out with special vividness against the (relatively speaking) neutral background of Plains roadsides.

Marling, Karal Ann. The Colossus of Roads: Myth and Symbol along the American Highway. Minneapolis: University of Minnesota Press, 1984.