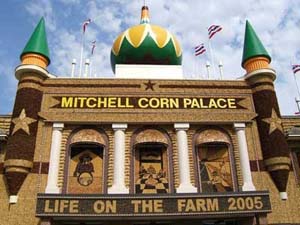 The Corn Palace is located in Mitchell, South Dakota, in the James River Valley. Mitchell was first platted in 1879. In 1892 the town began a six-day festival at the height of harvest season. One key event during this festival included constructing a simple frame building, the exterior of which was decorated with the principal product of the region–corn. A more permanent structure, replacing a second corn palace, was erected and opened in time for the 1921 festival. Eventually, seating in the building expanded to hold more than 5,000 people. The festival continues today and is typically held during the last week of August and the first week of September.

The structure is built of reinforced concrete. The exterior and interior of the building are covered with corn, sometimes as many as 600,000 ears. In addition, 2,000 to 3,000 bushels of other grains such as flax, rye, wheat, oats, and millet as well as bromegrass, bluegrass, and straw are combined with the corn to depict a different theme each year. The design is usually by local artists and is built upon themes such as "South Dakota Birds," "Salute to Agriculture," and "Youth in Action." Separate shades of corn are used to add depth to the various scenes.

The palace itself has been and still is used for various events besides the annual corn festival. John Philip Sousa's band, Bob Hope, and Lawrence Welk are just a few of the famous acts to have performed there. The Corn Palace is also home to high school and college basketball games–the NBA rookie of the year for the 2000–2001 season, Mike Miller, played his high school games there.

Previous: Colony of the East | Contents | Next: Cowboy Culture