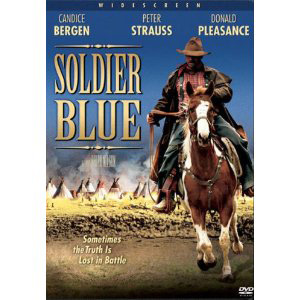 Soldier Blue (1970), directed by Ralph Nelson, is loosely based on Arrow in the Sun (1969), a novel by Theodore Victor Olsen (1932–93), a Wisconsin-born freelance writer of nearly four dozen Western sagas, including the best-sellers The Stalking Moon (1965) and Red Is the River (1983). As in the film, the novel centers on the fictitious characters of Private Honus Gant, a former schoolteacher from Ohio turned army trooper, and Cresta Marybelle Lee, a young woman from Boston who, while en route to marry an army lieutenant posted on the frontier some years earlier, is captured by a band of Cheyennes and becomes the second wife of the band's leader, Spotted Wolf. After escaping from the Cheyennes, Lee accompanies an army paymaster's detail that includes Private Gant to Fort Reunion, where her fiancé is stationed. When the paymaster's detail is ambushed and wiped out by Spotted Wolf 's band, Gant and Lee, the sole survivors, are forced to try to make it to Fort Reunion on their own. They never do, as their fates become linked to Colonel Iverson's brutal attack on Spotted Wolf 's village, which brings the film to a brutal, horrifying, and surreal climax.

Soldier Blue is badly flawed by a glaring anachronism, among other inaccuracies. Action portrayed in the novel supposedly takes place roughly in 1877, more than twelve years after Spotted Wolf had witnessed his entire family being murdered at Sand Creek by Col. John M. Chivington's Colorado Volunteers. Indeed, as we are told in the novel, Spotted Wolf had been instrumental in George Crook's humiliating defeat at Rosebud Creek, Montana, in 1876, and he had been at Little Big Horn too in that same year. Near the beginning of the film we learn that Private Gant's own father had been killed at the Little Big Horn the previous year, yet by the end of the film it is, inexplicably, November 29, 1864, when we relive the gory and ultraviolent (though poorly re-created) Sand Creek Massacre. Colonel Iverson becomes Lieutenant Calley, and Soldier Blue becomes an uneasy parallel to My Lai during which U.S. soldiers wantonly rape, murder, and mutilate hundreds of Native American men, women, and children.

Previous: Saunders, Russell M. | Contents | Next: Splendor in the Grass