SPLENDOR IN THE GRASS 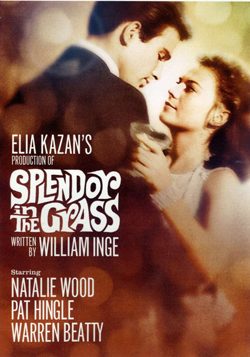 Splendor in the Grass DVD Cover

Based on an original screenplay by Kansas playwright William Inge, Splendor in the Grass (1961) reflects Inge's concerns with the problems and frustrations of small-town life in the Midwest. Determined to shake off his frustrations over his first failure on Broadway, A Loss of Roses (1959), Inge went to Hollywood to prepare Splendor for Elia Kazan, who had directed Inge's Dark at the Top of the Stairs for the stage two years before. Characteristically, the setting is a small Kansas town in the late 1920s (obviously Inge's hometown of Independence, Kansas) where two ill-fated young lovers, Bud Stamper and Deanie Loomis, struggle against the sexual inhibitions and materialistic priorities of their parents. As a result of their enforced separation, Bud goes to Yale and marries someone else, and Deanie goes insane and is confined to a mental hospital after a suicide attempt. At the end, both are forced to accept what has happened and find consolation in poet William Wordsworth's words, "We will grieve not, rather find / Strength in what remains behind."

Although Kazan was anxious to capture the look of Kansas, most of the film was shot on Long Island and Staten Island and in Poughkeepsie and the Filmways Studio in New York City. The role of Deanie was played by a young Natalie Wood, already an established actress. Bud's oppressive oil-rich father was played by Pat Hingle. Warren Beatty, a newcomer from the cast of the failed A Loss of Roses, appeared as Bud, and Inge appeared in a cameo role as the Reverend Whiteman. Ironically, the film's theme of the dangers of prudery and hypocrisy led to the excision by the Production Code censors of several scenes thought to be too sexually explicit. Despite some critical cavils (Dwight Macdonald scornfully suggested the film was essentially "an Andy Hardy story with glands"), the film opened to sensational box office returns and earned Inge an Academy Award for his screenplay.