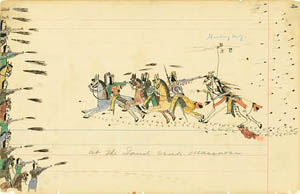 Southern Cheyennes and Arapahos will forever remember the Sand Creek Massacre, which occurred on November 29, 1864, when Col. John M. Chivington and his men of the Colorado Third Volunteer Regiment attacked their camp. Cheyennes called this ordained Methodist minister a "holy-speaking white man," yet his statement "Damn any man who is in sympathy with an Indian" expressed his antipathy toward them.

Two opposing forces caused the massacre. On one hand were the men of the volunteer Third Colorado Cavalry, known as the "Bloodless Third" because their 100-day enlistment had nearly expired without action against Native Americans and led by Colonel Chivington. On the other were the Cheyenne Dog Soldiers, who were opposed to the peaceful goals of Black Kettle and who had been making raids on white settlements–raids that were traced to some warriors of Black Kettle's band. These raids, and blatant land greed thwarted by the failure to acquire mineral-rich Cheyenne and Arapaho lands in treaty conferences in 1851 and 1861, led Gov. John Evans to order Chivington's command to attack.

Black Kettle's mostly peaceful band reported to Fort Lyon as "friendlies" and were told by the sympathetic commanding officer, Maj. Edward Wynkoop, that they should camp near Fort Lyon under military protection. Vister, a Cheyenne woman, described their sense of safety as they settled in along Sand Creek on the night before the attack. At dawn they were surprised by the attack, in which Chivington ordered his men to take no prisoners. Vister recalled that a male relative brought her a pony, striking it on its flanks to flee. Instead, she turned to find her younger brother, whom she pulled up behind her as bullets whizzed around them. One bullet struck her in the leg as they raced away from the besieged camp that flew a U.S. flag and a white flag on a lodgepole.

Vister's wound healed, but the trauma ran deep in her spirit. Cheyennes and Arapahos carry the memory of this massacre. In his testimony before a congressional committee, interpreter John Smith described the atrocities: "All manner of depredations were inflicted on their persons; they were scalped, their brains knocked out; the men used their knives, ripped open women, clubbed little children, knocked them in the head with their guns, beat their brains out, mutilated their bodies in every sense of the word."

Upon their return to Denver, Chivington and his men displayed scalps and other body parts from their victims to a cheering crowd in the Denver opera house. Reaction in the East could not have been more opposite–shock and outrage greeted the news, especially when details of the large number of women and children killed, as well as the way in which they died, became public knowledge. The military held an investigation and Congress held two, which transcended their original purpose and became investigations of all U.S. Indian policy. Congress condemned Chivington and his men, but as their enlistments had run out, they were no longer under military jurisdiction.

In response to the massacre, some Cheyennes and their allies the Arapahos and Lakota Sioux initiated raids all over the Northern Plains, particularly along the Platte River. It was the start of roughly ten years of war in the Northern Plains.

On October 14, 1865, U.S. government commissioners negotiated the Treaty of the Little Arkansas River, which read in part, "The United States being desirous to express its condemnation of, and, as far as may be, repudiate the gross and wanton outrages perpetrated against certain bands of Cheyenne and Arrapahoe Indians, on the twenty-ninth day of November, A.D. 1864, at Sand Creek, in Colorado Territory, while the said Indians were at peace with the United States, and under its flag, whose protection they had by lawful authority been promised and induced to seek, and the Government being desirous to make some suitable reparation for the injuries then done, will grant 320 acres of land by patent," as well as individual payments for property lost to survivors. This promise has not yet been kept.

In 1996 the General Conference of the United Methodist Church adopted a resolution apologizing "for the atrocities committed at Sand Creek, Colorado, by one of their own clergy members." They also offered to "extend to all Cheyennes and Arapahos a hand of reconciliation, and ask forgiveness for the death of over 200 mostly women and children."