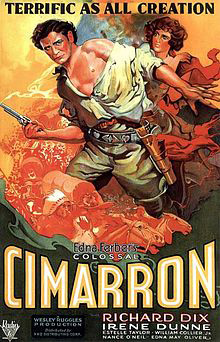 Released in 1931, Cimarron was directed by Wesley Ruggles, with a script by Howard Estabrook and Edna Ferber, based on her novel. The film won Academy Awards for best picture, art direction, and adapted screenplay.

One of the earliest epic films of the sound era, Cimarron (Spanish for "wild and unruly" and the name of a river in Oklahoma and Kansas) traces the history of the state of Oklahoma through its first forty years, beginning with the great land rush of April 22, 1889, when two million acres were opened to settlement. Although cheated out of his claim, Yancy Cravat (Richard Dix), a lawyer and newspaperman, moves his wife, Sabra (Irene Dunne), and child from her family's home in Wichita to the instant boomtown of Osage, Oklahoma. Well liked by nearly everyone, Cravat metes out two-gun justice to the town bully during a church meeting in the town's gambling tent and later kills an old friend who has become an outlaw. Lured by the spirit of adventure, Cravat abandons his family and lights out for the Cherokee Strip when it opens in 1893. Besides raising their two children, Sabra publishes Yancy's newspaper, leaving his name on the masthead. He returns after serving in the Spanish-American War and runs unsuccessfully for governor when the territory becomes a state in 1907. Once again he takes off for new adventures, leaving the paper in his wife's hands. By 1929 Oklahoma is in an oil boom, Osage is a modern city, the newspaper is a success, and Sabra, never giving up hope for her husband's return, has been elected to Congress. While touring the oil fields with other dignitaries she discovers her mortally injured husband, now an anonymous drifter hired as a roughneck. In the final shot, a statue unveiled in the city park honoring Oklahoma pioneers bears an unmistakable resemblance to Yancy Cravat.

Cimarron is the saga of the last frontier and the building of an empire. As seen in consecutive shots of its main street, Osage transforms in stages from tents and hastily thrown up shacks to a bustling modern city with automobiles, streetcars, and skyscrapers. The film also includes the theme, common in many Westerns, of the passing of the West from wide-open spaces to settled farms and towns. Yancy civilizes Osage with his six-gun, and he consistently stands for tolerance and progressive policies toward Native Americans. Ironically, it is practical Sabra, much less tolerant and more conventional in her attitudes about race and society, who is eventually elected to Congress, while her husband dies in obscurity.

Today the film looks slow, stilted, and talky, and Dix's performance, filled with histrionics, seems almost a self-parody. In addition, humor based on racial and physical stereotypes may make modern audiences wince. The opening scene of the 1889 land rush, however, is one of the most exciting action sequences in cinema. Unfortunately, nothing else in the film has so much energy.

Wright, Will. Six Guns and Society: A Structural Study of the Western. Berkeley: University of California Press, 1975.