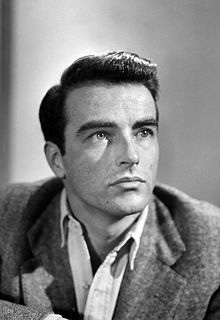 A major film star from the late 1940s through the early 1960s in such widely admired movies as Red River (1948), A Place in the Sun (1951), and From Here to Eternity (1953), Montgomery Clift set the standard for the new breed of Hollywood stars who emerged in the post– World War II era. Clift's casual attire, preference for life in New York instead of California, and belief that an actor owes nothing to the public except a good performance quickly became de rigueur attitudes for American actors wishing to be taken seriously.

Clift was born Edward Montgomery Clift in Omaha, Nebraska, on October 17, 1920. His family had no roots in the Great Plains. Clift's father, William, a Tennessean by birth, served for several years as vice president of the Omaha Trust Company. A 1921 Omaha city directory lists the Clift family residence at 3527 Harney Street. Clift's mother, Ethel, a Philadelphian, disliked Omaha, and when Clift was a small child the family relocated to Chicago. In the early 1930s they settled permanently in New York City, where Clift's father set up a lucrative investment counseling firm.

In 1934 Clift made his professional acting debut in a summer stock production of Fly Away Home, a new comedy by Dorothy Bennett and Irving White. When Fly Away Home moved to Broadway in January 1935, Clift remained in the cast and was launched on a career as a Broadway juvenile. Broadway productions he appeared in include Jubilee (1935), a Cole Porter musical, and There Shall Be No Night (1940), a Pulitzer Prize–winning drama by Robert E. Sherwood. A chronic case of amoebic dysentery exempted Clift from military service in World War II. Throughout the war years Clift continued with his Broadway career in Thornton Wilder's The Skin of Our Teeth (1942), Lillian Hellman's The Searching Wind (1944), and Elsa Shelly's Foxhole in the Parlor (1945). Clift's final Broadway appearance came in the drama You Touched Me! by Tennessee Williams and Donald Windham in the fall of 1945.

In 1946, after having spurned earlier offers from Hollywood due to his reluctance to sign a long-term contract with a movie studio, Clift accepted director Howard Hawks's offer of a principal role in the independently produced film Red River, a psychologically centered Western about a young man (Clift) and an older man (John Wayne) in conflict over leadership of a cattle drive. While Red River was entangled in legal and financial difficulties that delayed its release, Clift went to Europe to star in The Search, a low-budget semidocumentary about an American soldier working with displaced children in war-ravaged Germany. Released in the spring of 1948 to laudatory reviews, The Search introduced Clift to the moviegoing public and earned him a best actor Academy Award nomination. Finally released in September 1948, Red River was a critical and box office smash that firmly established Clift as an important new star. Publicity material presented Clift as the son of a Wall Street stockbroker and rarely mentioned his early years in Omaha. Clift considered himself a New Yorker, and in interviews he never suggested that his Nebraska birth had any effect on his life or acting style.

In 1953 Clift earned another Academy Award nomination for his portrayal of a sensitive young soldier in From Here to Eternity. After this Clift's career faltered because of his extreme choosiness in regard to scripts and his increasing problems with alcohol and prescription drugs. Injuries suffered in a 1956 auto accident blunted his finely turned facial features, and he began appearing in character parts that incorporated his now-battered appearance. Clift's later films include Suddenly Last Summer (1959), The Misfits (1960), Judgement at Nuremberg (1961), and Freud (1962). Clift died of a coronary occlusion at his home in New York City. His final film, The Defector, a low-budget spy thriller, was released posthumously in the fall of 1966.