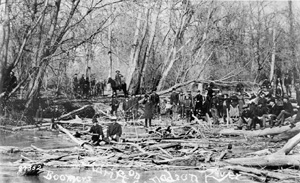 Boomers were settlers who worked for the opening to homesteading of the so-called Unassigned Lands located at the eastern margins of territory taken from the Creeks and Seminoles of Indian Territory after the Civil War. The early survey of this tract of nearly two million acres in the heart of the future state of Oklahoma led to the plausible assumption that the land was intended for settlement by non-Indians and should be available for homesteading. The claim made in the Chicago Tribune in 1879 by Elias C. Boudinot, a prominent Cherokee employed as a railroad attorney, that the land was public domain subject to homesteading apparently led to immediate attempts by would-be homesteaders. Three groups that tried to enter were turned back by U.S. army guards on the northern border during that year. However, David L. Payne, after failing to receive an answer from the U.S. attorney in Kansas as to whether the Unassigned Lands were open to homesteaders, put the matter to a test by leading a group of twenty-one to the vicinity of present-day Oklahoma City. They were removed to Kansas, and Payne was imprisoned for a time. One of the editors of the Boomer newspaper, the War Chief, published over a period of years in several places in southern Kansas, was even jailed for rebellion against the United States.

Further efforts at colonization also resulted in eviction to Kansas and arrests. One of the men who joined Payne, W. A. McCurry, took a group claimed to number about 500 deep into the territory before being ejected, and then only after the army unit that discovered the colony had been reinforced. In some cases, women and children were included among the colonists. After Payne's death in 1884, one of his men, William L. Couch, became the main Boomer leader. The last recorded entry of Boomer colonists was in October 1885. By this time, it appeared that homesteading would soon become legal because of political action. An Englishman, Samuel Crocker, aided this effort by extensive lecturing and lobbying. There were probably unreported individual efforts at settlement in addition to the Boomer colonies, but those settlers would have been considered Sooners, and if they had been discovered, they would have been disqualified as homesteaders. When at noon on April 22, 1889, homesteading became legal by presidential proclamation, the great land "run" was probably much the larger because of Boomer efforts.

Payne County bears the name of the Boomer leader, and the words "Boomer" and "Sooner" in the pep yell "Boomer, Sooner, Oklahoma U," long used at the University of Oklahoma, are both proud labels and probably better known than "89er," a name given to those who made the big run.