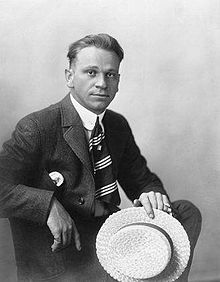 Wallace Beery, the burly actor who made his name in films playing a lovable slob, was born in Kansas City, Missouri, on April 1, 1885. He started in show business in 1901 as an elephant trainer, rising to become elephant manager at Ringling Bros. by 1904. Beery played in roadshow musicals and Kansas City theater until 1913, when he began acting in Essanay film comedies. His career in the movies began in drag, playing Sweedie, a Swedish maid.

In 1920s silent films Beery mixed rugged parts such as that of the menacing Magua in The Last of the Mohicans (1920) with comedies before developing what became his characteristic role–the scoundrel with a heart of gold–in Beggars of Life (1928). The advent of sound opened up new horizons for his acting, and he made his best films and became a major star in the 1930s. He was nominated for an Oscar for his convict role in The Big House (1930), and he shared (with Frederic March) a best actor award for his performance with child actor Jackie Cooper in The Champ (1931). The role for which he is probably best remembered, however, is pirate Long John Silver in Treasure Island (1934).

Beery continued making at least one film a year during the 1940s. His last (and 252nd) film was Big Jack, which was released in 1949, the year he died (on April 15) in Beverly Hills, California. Beery was married to actress Gloria Swanson from 1916 to 1918, and his brother (Noah Sr.) and nephew (Noah Jr.) were also actors.