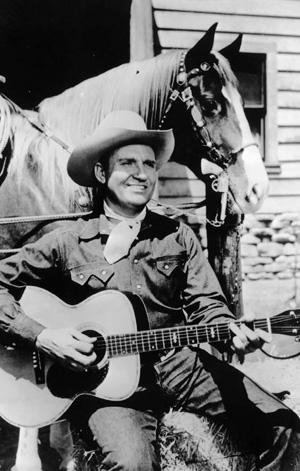 Gene Autry's career spanned some sixty years in the entertainment industry, encompassing radio, recordings, motion pictures, television, rodeo, and live performances. He also became a broadcast executive and major league baseball team owner. He is the only entertainer to have five stars on Hollywood's Walk of Fame. In his ability to transcend media and in the sheer scope of his output, Autry is unsurpassed as a popular image maker of the American West.

Born in Tioga, Texas, on September 29, 1907, Orvon Gene Autry spent most of his boyhood north of the Red River in Ravia, Oklahoma. He bought his first guitar for $8 at the age of twelve and began to sing in local drugstores and nightspots. By the late 1920s he was working as a telegrapher for the Frisco railroad and moving from town to town in Oklahoma. While he was singing and playing in the Chelsea office one night, he was discovered by the great cowboy humorist, Will Rogers. Rogers advised the young Autry to try radio, and the rest is history.

Autry began his radio career in 1928 with station KVOO in Tulsa as "Oklahoma's Yodeling Cowboy" and made his first recordings a year later. His first hit came in 1931 with That Silver-Haired Daddy of Mine, the first record ever certified gold for having sold more than a million copies. Autry made his film debut as a dude ranch cowboy singer in the 1934 Ken Maynard film In Old Santa Fe. In 1935 he made his first starring appearance in the science fiction Western serial The Phantom Empire. Autry's hugely successful movie formula combined Hollywood elements with his Plains upbringing: a mixture of flashy image and downhome sense. Other important ingredients were his singing; his trusty horse, Champion; and his faithful comic sidekick, Smiley Burnette (played by Pat Buttram). The combination proved irresistible to Depression-ridden audiences. By 1937 Autry was "America's Favorite Cowboy," voted the number one Western star by the theater exhibitors of America. He remained in first or second place among cowboy stars in terms of box office draw until he retired from motion pictures in 1953.

The successful Hollywood singing cowboy did not forget his roots. Many of his films, with titles such as Red River Valley (1936), Yodelin' Kid from Pine Ridge (1937), Blue Montana Skies (1939), and Sunset in Wyoming (1941), were set on the Plains. The effect of his upbringing on his creative output can also be seen in the frequent references to the Southern Plains in Autry's songs. He surrounded himself with Oklahomans: Bev Barnett, his publicity director; the Marvin brothers (Frankie and Johnny) and Jimmy Long, collaborators on many of his songs; and Jimmy Wakely and Johnny Bond, who played with Autry for years, all hailed from the Sooner State. His first wife, Ina Mae Spivey, Long's niece, whom Autry married in 1932 and who played a large part in his success until her death in 1980, came from Duncan.

In 1941 Autry purchased a 1,360-acre spread in the foothills of the Arbuckle Mountains, just west of Berwyn, Oklahoma, as the headquarters and winter home for his traveling rodeo. He named it the Flying A Ranch and Rodeo. Soon after, Berwyn changed its name to Gene Autry. The small Oklahoma town maintains a museum devoted to the man it honors. Autry also toured the Plains states extensively with his rodeo in the 1940s and 1950s, usually appearing in small towns before packed audiences.

In total, Autry appeared in 93 feature films and made 635 recordings, more than 300 of which he wrote or cowrote. His best-known movies were based on his hit records, including South of the Border (1939), Back in the Saddle (1941), and Strawberry Roan (1948). His recordings have sold more than 60 million copies and brought him more than a dozen gold records. Autry's beloved Christmas and children's records, Here Comes Santa Claus (1947) and Peter Cottontail (1950), went platinum (for more than two million copies sold), while Rudolph the Red-Nosed Reindeer (1949) remains the second best selling single of all time (behind only Bing Crosby's White Christmas), with sales totaling more than 30 million.

In addition to his movie and recording success, Autry's Melody Ranch was heard weekly over the CBS Radio Network between 1940 and 1956. During World War II Autry enlisted for service on the air during a broadcast of the show. Sgt. Gene Autry served his country as a flight officer with the Air Transport Command. From 1943 until 1945 he flew large cargo planes in the China-Burma-India theater. When the war ended, Autry was assigned to Special Services and toured with a uso troupe in the South Pacific before resuming his movie career in 1946.

Realizing that the days of the B-Western were numbered, in 1950 Autry became one of the first major film stars to move into television. For the next five years he produced and starred in ninety-one episodes of The Gene Autry Show as well as producing such popular television series as Annie Oakley, The Range Rider, Buffalo Bill Jr., and The Adventures of Champion. In the late 1980s Autry and his former movie sidekick, Pat Buttram, hosted ninety-three episodes of the Melody Ranch Theatre show, spotlighting the telecasting of his old Republic and Columbia movies.

A long-cherished dream came true with the opening in Los Angeles in November 1988 of the Gene Autry Western Heritage Museum (renamed the Autry Museum of Western Heritage in 1995). Autry stated: "It has always been my intention to build a museum which would exhibit and interpret the heritage of the West, and show how it has influenced America and the world." The Autry Museum is now acclaimed as one of the foremost museums of the American West, with important collections of art, artifacts, and documents, drawing millions of visitors from around the world. Jackie Autry, whom he married in 1981, serves as chairman of its board of directors.

Autry's extraordinary life ended at his home in Los Angeles on October 2, 1998 after a long illness. He was ninety-one years old.