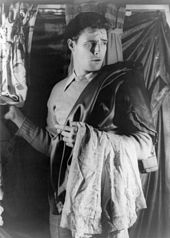 A 24-year-old Brando as Stanley Kowalski on the set of the stage version of "A Streetcar Named Desire, photographed by Carl Van Vechten in 1948"

Marlon Brando was born on April 3, 1924, in Omaha, Nebraska, to Dorothy Pennebaker Brando and Marlon Brando Sr. The Brandos had two other children, Jocelyn and Frances. Marlon's bully of a father was a salesman; his eccentric mother was an actress with the local community theater. Both had drinking problems. Descended from Irish immigrants, the family had been living in Nebraska for generations. Brando spent the first six years of his life in Omaha in a large wood-shingled house on a quiet street lined with elm trees. His earliest memories recall the sweet fragrance of freshcut hay and lilies of the valley and the grating sound of boots on frozen snow on a frigid Plains winter day. In 1930 his father took a job in Evanston, Illinois, and the family left Nebraska behind.

In 1943, when he was nineteen years old, Brando moved to New York City and began studying acting at the Dramatic Workshop of the New School for Social Research. His teacher, Stella Adler, had studied with Konstantin Stanislavsky, the director, acting theorist, and founder of the Moscow Art Theatre. In 1944, when he was twenty years old, Brando had his Broadway debut as Nels in the Richard Rodgers production of I Remember Mama. The play ran for two years. This was followed by performances in 1946 in Maxwell Anderson's Truckline Cafe, George Bernard Shaw's Candida, and Ben Hecht's A Flag Is Born. In 1947 Brando was chosen for the role of Stanley Kowalski in Tennessee Williams's A Streetcar Named Desire, directed by Elia Kazan. The Broadway premiere was a tremendous success. Marlon Brando became a star celebrated by audiences and critics alike.

In 1950 Marlon Brando began his career as a film actor. He brought his acting style and his training from Elia Kazan and the Actors Studio to the screen. In his film debut in Stanley Kramer's The Men, he played an embittered paraplegic. He prepared for the role by spending a month in a hospital ward for the rehabilitation of paraplegics. Brando was subsequently nominated for a best actor Academy Award for four successive years: for his performances as Stanley Kowalski in A Streetcar Named Desire (1951), Emiliano Zapata in Viva Zapata! (1952), and Marc Anthony in Julius Caesar (1953). He won the award for his portrayal of Terry Malloy, under the direction of Elia Kazan, in On the Waterfront (1954).

In 1971 Brando won his second Oscar for his powerful performance as Don Corleone, the patriarch of the Corleone crime family in The Godfather. In 1972 he was nominated for another best actor Oscar for his role in Bernardo Bertolucci's controversial Last Tango in Paris. In 1989 Brando gained another Oscar nomination for best supporting actor in A Dry White Season. He has continued to make films.

Through all of life's vicissitudes Marlon Brando has remained the quintessential film actor. He revolutionized the concepts of film acting yet repeatedly dismissed acting as a waste of precious time and life. Deeply and actively committed to humanitarian causes, he has vigorously used his heroic status to publicly advance civil rights, from joining Dr. Martin Luther King Jr.'s March on Washington to his refusal to accept his Oscar for The Godfather as a way of protesting the treatment of Native Americans.