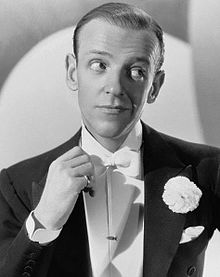 No one knows what possessed Fred Astaire to put on a pair of ballet slippers in an Omaha dance studio at the age of four and begin his long journey to stardom. It happened at the turn of the century at Chambers Dancing Academy, where Astaire's sister, Adele, took dance lessons. Astaire often accompanied his mother or father to the studio to pick her up. The young lad, not surprisingly, had no interest in dancing. In his autobiography, Steps in Time, Astaire wrote: "Dancing was merely something my sister did, something that all little girls did. I let it go at that and the hell with it." Unbeknownst to Astaire at that time, dancing would consume his life and help him create an entertainment legacy that includes more than forty Hollywood films.

The son of an Austrian beer salesman, Astaire was born Frederick Austerlitz in a humble bungalow not far from downtown Omaha on May 10, 1899. The house still stands at 2336 S. 10th Street, but without any marker of its historical significance. The family moved to the north side of Omaha near the old Storz Brewery when Astaire was about a year old. The dilapidated brewery still stands, but the two homes where the Austerlitzes lived, 1429 N. 19th Street and later 1426 N. 19th Street, are gone. Astaire recalled very little of his early years in Omaha, except the sound of rumbling locomotives in the nearby railroad yards and taking Sunday afternoon buggy rides with his father to a local cigar store.

When he was four years old, Astaire and his sister boarded a train with their mother and headed for New York and professional dance training. Their father stayed behind and sent money to help the family. It was in New York that the two children began their dancing careers. According to legend, their first job was in a Keyport, New Jersey, theater, where they danced on a large wedding cake as bride and groom. Astaire wore what would eventually become his trademark tails, white tie, and top hat. They got $50 for their efforts.

Astaire spent his early youth traveling the Orpheum circuit as a vaudeville act with his sister. They played in Omaha and possibly Lincoln, which also had an Orpheum Theater. "We played every rat trap and chicken coop in the Middle West," Astaire recalled in his autobiography. He and his sister danced on Broadway but split up their act in 1932, when Adele married a British nobleman. Like most stars, Astaire made his way to Hollywood.

After a screen test, one talent scout infamously wrote: "Can't act. Can't sing. Balding. Can dance a little." For a scrawny guy who was never much of a looker, Astaire danced with the crème de la crème of silver screen stars: Audrey Hepburn, Cyd Charisse, Judy Garland, and Eleanor Powell, to name only a few. Most notably, he partnered Ginger Rogers in ten films, beginning with Flying Down to Rio in 1933. His film career spanned fifty years (1931-81), and for all of them he was a star. He won almost every movie award, including an honorary Academy Award in 1949. He legitimized dance in movies, his repertoire spanning tap, ballet, and jazz. He choreographed all his own work, and he made it look effortless. A national chain of dance studios now carries the Astaire name.

The Adele and Fred Astaire Ballroom, which takes up most of the top floor of the historic Storz Mansion at 3708 Farnam Street, stands as the only memorial to his Omaha beginnings. Despite his accomplishments and his status as one of the greatest figures in entertainment history, Astaire remained a modest man. "I don't understand what people see in me," he wrote. "I don't look like a movie star and I don't act like a movie star. I'm just an old So and So from Omaha." Fred Astaire died in Beverly Hills, California, on June 22, 1987.