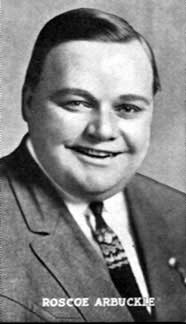 Actor, director, screenwriter, and Hollywood outcast, Roscoe Conklin Arbuckle was born in a sod house on his parents' farm near Smith Center, Kansas, on March 24, 1887. His father never liked farming, and a decade later he uprooted the family and moved to California.

Neither Roscoe's parents nor his siblings were heavy, but Roscoe quickly grew into his nickname (a nickname he hated), surpassing 200 pounds by the time he was twelve. Nevertheless, "Fatty" was agile, and by the time he was fifteen he was performing in vaudeville up and down the West Coast as acrobat, singer, and magician. His break came in 1908, when he was hired as an extra by the Selig Polyscope Company, and he began a slow transition from vaudeville to motion pictures, appearing in numerous one-reel comedies. In 1913 he joined Mack Sennett's Keystone Studios and was soon a star, acting alongside, among others, Charlie Chaplin. After 1916 he wrote, directed, and acted in innumerable films, launching the career of his fellow Kansan, Buster Keaton, in one of them (The Butcher Boy, 1917). Arbuckle's popularity soared; so did his salary, to $7,500 a week by 1920.

His fall was meteoric. On September 4, 1921, at an alcohol-soaked party at a San Francisco hotel, the aspiring actress Virginia Rappe went into convulsions after allegedly being raped by Arbuckle. Five days later she died, and Arbuckle was charged with murder. He was eventually acquitted, but his career was ruined. In the following years he directed films under a pseudonym and seemed to be on the verge of making an acting comeback when, in the early morning of June 29, 1933, in New York City, he fell victim to a heart attack.