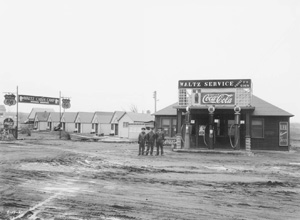 Roadside architecture refers to businesses and building types that evolved in response to the automobile. The most significant occurrence of these buildings, therefore, has been within highway corridors. The Great Plains was crossed by numerous historic highways, including overland trails and railroads. Automotive highways represent twentieth-century additions to these established routes; these in turn were superseded by interstate highways after 1950. Most of the historic highways were east-west federal transcontinental routes such as U.S. 20, U.S. 30, and U.S. 40. Early northsouth transcontinental routes such as U.S. 75 and U.S. 81 are less well known. Other early-twentieth-century automotive highways such as the Yellowstone Trail and Route 66 were regional routes primarily associated with tourist traffic.

Highways changed rapidly through time, as did corresponding roadside architecture; early routes and related businesses were often bypassed. However, many types and periods of roadside architecture existed simultaneously, so buildings continued to evolve stylistically. The necessity of providing basic services such as repairs, gas, food, and lodging resulted in the emergence of distinctive building types as the automobile gained predominance after about 1920. Other, more novel businesses with specific architectural forms developed in response to the automobile, including tourist or roadside attractions, drive-in restaurants, and drive-in movie theaters.

Roadside architecture–whether gas station, combination restaurant/gas station, or motel–often adopted regional references based on local vernacular traditions as interpreted for commercial or corporate enterprises. The automobile traveler crossing the Great Plains, for example, could find a sod house or covered wagon tourist stand or a tipi village motel. Such businesses, however, designed to attract passing traffic, were not constrained by historic or geographic accuracy. Many highways through the Great Plains also featured Dutch windmill gas stations and Spanish mission-style motel courts.

Throughout the largely rural expanse of the Great Plains roadside accommodations were initially limited. Early travelers relied on established businesses for food and other supplies, carried camping gear, or stayed at existing hotels in cities and towns along the route. But communities quickly responded to the increasing numbers of automobile travelers and provided free campgrounds in public parks or designated areas. Campgrounds led to commercial enterprises such as cabin camps that provided auto-camping areas and included simple frame one-room cabins. A store with gas pumps and a separate shower/restroom building were often part of the complex.

Cabin camps and available hotels developed into a building type–the motel–that was specifically designed to accommodate automobile travelers. Although many motels featured individual units, they were often arranged into U- or L-shaped courts connected by enclosed garage spaces. Later (although all forms existed concurrently), the motel evolved into a single-story connected building with an attached or separate office constructed of a uniform material such as brick. Integral garage spaces were no longer part of the building; instead, automobiles were parked outside individual units. Freestanding neon signs adjacent to the highway became typical features. A more ephemeral feature of many motels was landscaping, typically a centrally located flower garden or decorative shrubs and trees around individual units.

During the emergent years of the automobile, gas stations and service stations evolved from existing buildings. Livery stables, typically simple frame commercial buildings, added automotive services. Separate buildings soon emerged. In the 1920s throughout the Great Plains these structures were similar to surrounding commercial buildings—frame, brick, or concrete block—identified by advertising signs or, more significantly, by one- or two-bay service entrances on the main facade. Early freestanding gas stations were usually small buildings with canopies, gas pumps, and a small interior office area. Service bays were attached to the main building, generally one square or rectangular bay distinguished by garage doors. As gasoline companies took over along major highways, building designs and logos became standardized. Small picturesque gas stations became outmoded and were replaced by larger porcelain-enamel rectangular or square buildings with office, food, restrooms, and service bays contained within one building.

Drive-in restaurants and drive-in movie theaters developed exclusively in response to the automobile. Although both of these forms enjoyed a period of popularity in the Great Plains as elsewhere, the novelty soon faded, leaving many such businesses abandoned. Drive-in restaurants were characterized by a freestanding building that initially provided curbside service. The novelty of these businesses was in placing an order from and being served in the car. The limitations imposed by the Great Plains climate, however, resulted in either an expansion of indoor seating or a truncated commercial season. Similar to gas stations, roadside restaurant design soon became standardized.

Drive-in theaters originated in the 1930s and reached their peak of popularity and expansion during the 1950s. Because of the amount of land they required, drive-ins were located at the edges of towns, typically on major highway commercial corridors. The enormous screen faced inward to the parking stalls, which fanned outward to the edges of the complex. The inward-facing screen, often oriented along the major thoroughfare, served as a large sign advertising the theater name. Others with the screen located inside the complex utilized freestanding signs that were visible to tra.c from either direction. Again, because of the climatic rigors of the Great Plains, drive-ins were seasonal businesses. Unlike drive-in restaurants, the vast amount of land required for drive-in theaters often resulted in developmental pressure, particularly along highway commercial strips. This pressure, combined with the faddish nature of their existence, often led to their complete obliteration in less than a generation. By 2000 no more than a handful remained open in the Great Plains.

Examples of roadside architecture, from early motels with connected garage stalls, to small cottage-style gas stations, to abandoned drive-in movie theaters, still stand on the landscape of the Great Plains. An architectural phenomenon intrinsically linked with the automobile and associated highway systems, roadside architecture has characteristically changed rapidly, and it continues to evolve.