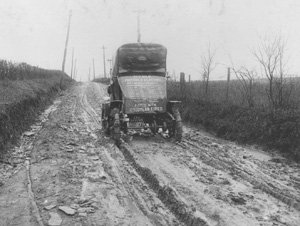 Automobility revolutionized life in the Great Plains. Marked by vast distances and low population widely scattered on farms and ranches, the region was characterized by isolation, loneliness, and provincialism. Before 1900, railroads controlled transportation on the Plains. To be viable, farms had to be close to rail lines. Crops and cattle went to market on the rails; goods and equipment arrived the same way. Residents of the Plains, on horseback or in carriages and wagons, rarely traveled outside a ten- or twelve-mile radius. Automobility meant personally controlled freedom to travel, and for Plains families, cars and trucks opened new economic and social worlds.

Rural Americans were initially suspicious of automobiles. Expensive, fast, noisy, unreliable, dangerous, the playthings of the urban rich, it was hard to imagine that they could ever have value in the lives of country folk. The town council of Mitchell, South Dakota, expressed the thoughts of many when it banned automobiles from within town limits. But by 1905 cars had become more reliable and less expensive. Henry Ford, who had founded his car company two years before, concluded that the secret to success in the automobile business lay in the production of a light, rugged, powerful, inexpensive car that virtually anyone could afford. In 1908 he introduced the Model T.

The touring car, a five-passenger vehicle with a canvas top and side curtains, was the staple of Model T production. With 22 horsepower to pull 1,200 pounds, the car could go virtually anywhere and do practically anything. Cowboys ran cattle in Model Ts, and farmers carried grain and calves to market in them. Model Ts put Plains farmers and ranchers on wheels and introduced them to a whole new world.

Throughout its production, from 1908 to 1927, virtually the only thing that changed about a Model T was its price, which declined from $850 to $290. Other models were available, including the popular two-seat runabout, which was even less expensive, and a much more costly sedan, but the touring car outsold them all and became by far the most common car on the roads.

Great Plains farmers and ranchers, enjoying remarkable prosperity prior to the 1920s, snapped cars up in numbers that astonished everybody. In 1910 the ratio of adult population to cars was 65 to 1 in Nebraska and 72 to 1 in North Dakota, ranking them fourth and fifth in the nation. Kansas and South Dakota were fourteenth and nineteenth. In the early 1920s, after millions of cars had been sold, the rankings told a similar story–Nebraska and Kansas were third and fourth, South Dakota was seventh. By 1936 five Great Plains states were in the top ten in car ownership as a proportion of population, with Wyoming in third place with a population to motor vehicle ratio of 3 to 1. The national average in 1936 was nearly 5 to 1. Such figures document the extraordinary popularity–and necessity–of motor vehicles among the residents of the Great Plains. Purchasing cars and trucks in much larger numbers than buyers elsewhere, they were targeted by the automakers as the best market in the country.

Prior to 1930, over half of these vehicles were Fords. Chevrolet rapidly gained preeminence, however, thanks to the introduction in 1929 of a six-cylinder engine that came in four-door sedan trim for only $675. Ford never regained its earlier dominance of the market, even with its introduction in 1932 of an efficient and powerful V8. Between the two there was little room left for other makes, although hopeful Great Plains entrepreneurs entered the automobile business. At least 142 firms organized to manufacture cars and trucks for sale in the exploding local market. Some, such as the Great Smith of Topeka and the Patriot of Lincoln, enjoyed brief success, but none could effectively compete.

Car ownership liberated Plains residents from the isolation and loneliness of life and expanded their world beyond the limitations imposed by horse-drawn travel and stationary rails. At the same time, the freedom of movement drastically changed Great Plains society. One-room schools gave way to consolidated county schools; country doctors moved to towns, opened offices, and associated themselves with local hospitals; and crossroads general stores closed while farm families whizzed by on their way to department stores in town. Town churches absorbed rural members while country churches withered. Indeed, towns became the focus of rural life.

At the same time, fertile land too distant from rail lines to be profitable could now be farmed, and with acreage once devoted to keeping horses put into market production, yields soared. The overproduction and collapsing prices of the 1920s were, in part, also the result of automobility. The transformation of the Plains was the result of the desires of thousands of individuals to free themselves from the dreary loneliness of life in isolation. Automobiles made that transformation possible.