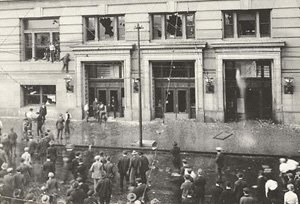 During the frenzy of a riot in Omaha, Nebraska, on September 28, 1919, Will Brown, an African American, was lynched near the Douglas County courthouse. He was accused of raping Agnes Loebeck, a white woman. Identified by Loebeck and Milton Hoffman, the young man with her on the night of the alleged attack, Brown had been taken to the police station and then transferred to the courthouse jail. On Sunday morning, the twenty-eighth, a crowd of mostly young men gathered at a school on the south side and was led downtown by Hoffman, adding followers as it progressed.

Earlier in the afternoon the situation seemed nonthreatening, but it turned ugly as time passed and more people appeared on the scene. From 300 at the school, the crowd increased late in the day to an estimated 4,000 at the courthouse. Demanding that Brown be handed over to them, the demonstrators turned on the police and set the courthouse on fire. When firefighters appeared, their hoses were cut into pieces by rioters who had broken into nearby hardware stores and stolen axes as well as firearms. Mayor Edward P. Smith was at the scene and came out of the courthouse at about 10:30 p.m. to try to restore order. He became a target of the mob and was nearly lynched himself before being rescued.

The mob then turned its attention back to Brown, who along with other prisoners had been taken to the roof of the courthouse as the fire spread. Finally the rioters achieved their goal and Brown was taken and reportedly handed over the heads of the rioters down the stairs. By the time the ground floor was reached, he had likely been beaten to death. Hoisted into the air on a lynch rope, his swaying body was then riddled with bullets. Not yet satisfied, the crowd pulled his corpse to a nearby intersection where he was burned, and what remained of Will Brown was then towed about downtown Omaha. The victim's death certificate gave his age as "about 40," marital status unknown, birthplace left blank, and the principal cause of death bullet wounds and strangulation.

During the night federal troops restored order, and in the morning, armed with machine guns, they guarded downtown streets. Several arrests were made in the following days for complicity in the riot, but a grand jury's deliberations resulted in only a few indictments of little consequence.

Omaha was not the only city where rioting blighted the summer and fall of 1919. Chicago and Washington dc, among others, had outbreaks of racial violence and deaths. But in Omaha racial tensions may have been orchestrated for political purposes. A reform movement's candidates had been elected in 1918, defeating the political machine headed by Thomas "Old Man" Dennison that had dominated city hall for two decades. Direct accusations by church leaders and an assessment by Gen. Leonard Wood assigned responsibility for the lynching to political ambition. They asserted that to discredit the reformers, Dennison and his newspaper ally, the Omaha Bee, exaggerated crime and racial tensions to create the atmosphere that exploded on September 28, 1919. Two years later voters restored the Dennison slate to office. Will Brown appears to have been the victim of political machinations as well as racial prejudice.