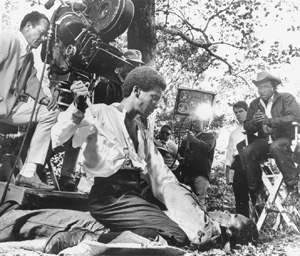 Gordon Parks, in the director's chair

Gordon Parks overcame barriers of race and poverty to become a noted photographer, writer, filmmaker, composer, and painter. He was born on November 30, 1912, and grew up the youngest of fifteen children in a poor farm family in Fort Scott, Kansas. During his midteens his mother's death led him to leave Kansas to live with relatives in St. Paul, Minnesota. He stayed there briefly before entering a nomadic phase during which he traveled through much of the United States and later the world. Parks played piano in brothels, learned to play the trumpet, and began composing music while trying to finish high school. A stint singing and composing for a band took him to New York City. When the band's demise left him stranded and penniless, he joined the Civilian Conservation Corps in 1933. He later worked as a waiter on the North Coast Limited, a luxury train that ran from Chicago to Seattle.

In 1938, within a year of buying his first camera at a pawnshop, Parks had his first photographic exhibit in an Eastman Kodak store in Minneapolis. He quickly developed his photographic skills through incessant work, including shooting events at Chicago's South Side Community Art Center, fashion spreads for department stores, portraits of wealthy families, and photo essays about poverty on Chicago's South Side. His work documenting poverty earned Parks a Julius Rosenwald fellowship, which he used to train with Roy Emerson Stryker at the Farm Security Administration (FSA) in Washington DC. After Parks left the FSA he moved to Harlem and freelanced for Glamour and Vogue. He joined Life in 1948 and contributed to the magazine for more than twenty years. Parks launched his publishing career in 1947 with Flash Photography, an instruction manual. He later wrote a novel, The Learning Tree (1963), about growing up as an African American in rural Kansas, various books of poetry and photographs, and two memoirs, A Choice of Weapons (1966) and Voices in the Mirror: An Autobiography (1990).

Parks began consulting in the film industry during the 1950s and became the first black director of a major motion picture when he brought The Learning Tree to the screen in 1969 for Warner Brothers–Seven Arts. He continued directing with Shaft (1971), Shaft's Big Score (1972), Super Cops (1974), Leadbelly (1976), and The Odyssey of Solomon Northrup (1983), among others. In addition to directing, Parks wrote the screenplay and musical score for The Learning Tree and wrote the score for Shaft's Big Score. He also composed a piano concerto and the music and libretto for Martin, a five-act ballet tribute to Martin Luther King Jr. In recent years Parks has moved to abstract color photography, using paint and computer technology to alter his photos.

Parks, Gordon. Half Past Autumn: A Retrospective. Boston: Bullfinch Press, 1997.