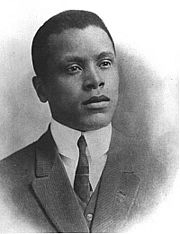 Oscar Micheaux was born on January 2, 1884, in Metropolis, Illinois. The details of his early life are obscure, but he may have worked in Chicago as a stockyard hand and Pullman porter. Inspired by Booker T. Washington's philosophy of economic empowerment through landownership and black business development, Micheaux took out a homestead in 1904 on part of the Rosebud Reservation in South Dakota. After establishing a successful farm, despite the attempts of his white neighbors to sell him inferior farming equipment and animals, the death of his wife during childbirth, and the hostile physical environment, Micheaux turned to writing novels that reflected his experiences: The Conquest: The Story of a Negro Pioneer (1913); The Forged Note: A Romance of the Darker Races (1915); The Homesteader (1917); and The Wind from Nowhere (1941). He considered these novels as another business venture; he controlled their production from start to finish by submitting to the press printworthy originals of his manuscripts, paying in cash for their publication, and distributing them door-to-door to African Americans throughout the Midwest and South. His novels appealed to African Americans because they presented a critique of black urban life and offered a solution: they should abandon the cities and look to the Great Plains as a place where they could build an alternative to American urban society.

Micheaux's attempts to popularize his novels led him to filmmaking. In 1918, having established the Western Book and Supply Company in Sioux City, Iowa, to produce and distribute his novels, he was contacted by George P. Johnson, general booking manager of the black-owned and operated Lincoln Film Company of Los Angeles, California. Johnson, who also operated an office in Omaha, Nebraska, had read The Homesteader and raised the possibility of producing a film version. In May 1918 Micheaux traveled to Omaha to sign a contract with Johnson to film The Homesteader. But Micheaux's desire to supervise the actual filming of the production, combined with his lack of experience in directing, caused the contract to fall through.

So Micheaux formed his own film company, the Micheaux Film and Book Company, with offices in Sioux City and Chicago. As he had done previously with the Western Book and Supply Company, Micheaux sold stock in the newly formed film and book company to white farmers around Sioux City. He finally raised enough money from selling shares to produce The Homesteader as an eight-reel film in 1918. In all, Micheaux would produce more than forty-four all-black-cast films nationally, some of which were distributed in Europe. His films were widely distributed because of his refusal to propagandize them. He felt that black people did not want racial propaganda like that evident in many of the films produced by Hollywood and some of the white independents. Instead, they wanted a good story–films that reflected the social, economic, and political conditions under which African Americans existed in America.

Taken to task for casting light-skinned African Americans in leading roles, for imitating the manners and sensibilities of white society, and for using his people as "plastic" models, Micheaux did not attempt to shield himself from criticism. Writing in the Philadelphia Afro-American on January 24, 1925, Micheaux commented, "I do not wish anyone to construe this as a request for the suppression of criticism. Honest, intelligent criticism is an aid to the progress of an effort. The producer who has confidence in his ideals, politics [sic] constructive criticism. But he also asks fairness, and fairness in criticism demands a familiarity with the aims of the producer, and a knowledge of the circumstances under which his efforts were materialized." Nonetheless, many of his critics categorized his films as second-rate "underground" films.

These criticisms ignore the fact that Micheaux produced films under difficult circumstances. He always lacked the funds necessary to achieve high technical standards, to produce special effects, and to stage massive action scenes. He usually did all the work in his productions except for perfunctory tasks. He wrote scenarios, supervised filming, and handled the bookkeeping. His pictures took an average of ten days to shoot and usually cost between $10,000 and $20,000. Once the production of a film was under way, Micheaux would often make a contract with a theater to supply him with money in return for the theater receiving first screening rights. He would take several of the actors with him on the train to visit prospective patrons. The actors would perform a couple of scenes from the script for the theater manager while Micheaux emphasized the importance and marketability of the script.

In 1920 Micheaux's brother, Swan, joined him as manager of the Micheaux Film and Book Company. In 1921 the corporation had a cash dividend of 25 percent and established an office in New York City. The distribution and financial office remained in Chicago under supervision of Swan Micheaux and Charles Benson. Micheaux was enterprising enough to secure a number of firms to distribute his films: Tiffany Tolliver and W. R. Crowell distributed his films in the East from a branch office in Roanoke, Virginia, while A. Odanes, owner of the Verdun Theater in Beaumont, Texas, distributed the films in the Southwest.

Between 1918 and 1931 Micheaux produced twenty-seven films, most of which were silent. His first all-sound feature was The Exile (1931), which was made from his novel The Homesteader. Between 1931 and 1940 he produced and directed sixteen all-sound features. In 1948 he wrote the screenplay for and directed The Betrayal for Astor Pictures Corporation. The screenplay was adopted from Micheaux's novel The Wind from Nowhere; it was his last known film activity. This film opened in a white movie theater in downtown New York to poor reviews. Lack of financial resources forced Micheaux to file a voluntary petition of bankruptcy in 1948.

When Micheaux died in Charlotte, North Carolina, on March 25, 1951, his film corporation was virtually bankrupt. Nevertheless, Oscar Micheaux's entrepreneurial activities won him the distinction as the first independent African American film director and producer. His legacy is kept alive through the Micheaux Film Society of Oakland, California.