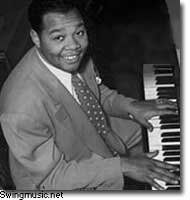 Jay McShann at the piano

Emerging in the 1930s from the blues-drenched soil of eastern Oklahoma, Jay McShann quickly established himself as a dominant Kansas City pianist, rivaled only by Mary Lou Williams and Count Basie. His "band that swung the blues" formed in 1939 and included some of the finest musicians of the area. It was this band's recordings, in 1941, that gave Charlie Parker his first national exposure. McShann continues to be active at the beginning of the new millennium, his diverse styles constituting a lexicon of twentieth-century jazz and blues pianism.

Jay McShann was born in Muskogee, Oklahoma, on January 12, 1916. Muskogee, a town of 30,000, was also the home of guitarist Barney Kessel, bassist Aaron Bell, and tenor saxophonist Don Byas, all important jazz men. It was with Byas that McShann began his professional career in 1931; by 1937 he was fronting his own bands in the Kansas City area. By then, McShann had become a versatile pianist, combining his blues background of barrelhouse and boogie-woogie (influenced by Pete Johnson) with a percussive, jazz comping style characterized by dense, chordal textures. Though most associate McShann with small groups, particularly those with bassist Gene Ramey and drummer Gus Johnson, his most famous band, formed in 1939, was a large ensemble that boasted such outstanding sidemen as trumpeters Orville "Piggy" Minor and Buddy Anderson, trombonist Bob Mabane, and saxophonist Charlie Parker, as well as blues shouter Walter Brown. Later recordings for Decca in Wichita, Kansas, and Dallas, Texas, yielded such classic numbers as "Swingmatism," "Confessin' the Blues," and "Hootie Blues," several of which contained the protobop solos of nineteen-year-old Charlie "Yardbird" Parker.

Bolstered by the success of the Decca recordings, especially "Confessin'," which sold over 5 million copies, McShann moved to New York in 1942 to open at the Savoy opposite Lucky Millinder's orchestra. McShann's powerful blues-style-based jazz was still relatively unknown outside the Midwest, but the band garnered rave reviews from the critics. McShann returned to the recording studio in 1942, adding "Sepian Stomp" and "Jumpin' the Blues" to jazz posterity. After this session, the band began to break up, and McShann was drafted in 1944.

Returning to music after the war, McShann preferred playing with small groups, working as leader and accompanist with such artists as blues shouters Big Joe Turner and Jimmy Witherspoon and swing violinist Claude "Fiddler" Williams. In 1959 McShann returned to Kansas City, which is still his home. Much of his playing, including at many major European jazz festivals, was with Williams and drummer Paul Gunther. McShann also began to develop his singing, fashioning a raspy blues timbre reminiscent of Turner and Walter Brown. In 1978 he was featured with the Lincoln (Nebraska) Symphony Orchestra in Robert Beadell's work Variations for Jazz Trio, Flugelhorn and Strings. Also that year, accompanied by Paul Gunther and Randy Snyder on bass, McShann was profiled in Hootie's Blues, a film by Bart Becker and Michael Farrell. McShann is also a major participant in the documentary The Last of the Blue Devils (1979). In honor of his contribution to music in Kansas City, by proclamation of the governor, March 3, 1979, was designated "Jay McShann Day."