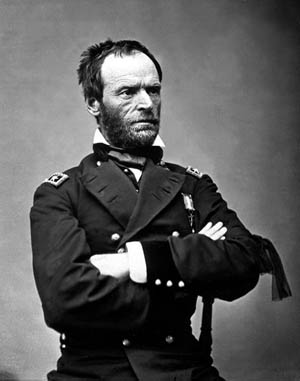 A leading Union general in the Civil War, William Tecumseh Sherman was also a driving force in the postwar settlement of the Great Plains. Sherman was born in Lancaster, Ohio, on February 8, 1820, and brought up in the family of Thomas Ewing, a leading politician. After graduation from the U.S. Military Academy at West Point, he served in the Second Seminole War and in the Mexican War. His success was assured by his leadership and victories in the Civil War, where he put into practice his strategy of property destruction as a means of war, a strategy he would continue against Plains Indians. From 1866 to 1869 he commanded the Military Division of the Missouri, covering the area from the Mississippi River to the Rocky Mountains (with Texas exexcluded). In 1869 he became commanding general of the entire U.S. Army, a position he held until his retirement in 1884.

Throughout these years, though his responsibilities were wide-ranging, Sherman focused much of his attention in the Great Plains. There, the great transcontinental railroads were built and the Native Americans struggled against the ever-increasing encroachment of the United States. As white settlers poured into the region, Native Americans tried to stem the tide, but the U.S. Army, under Sherman's leadership, thwarted the effort. With the completion of the first transcontinental railroad in 1869 and the subsequent building of other rail lines, Indians could not compete against increasingly mobile soldiers and the mass of settlers. Sherman advocated all-out war aimed at destroying the Indians' subsistence base. Sherman's view of the struggle was a complex one. On one hand, he opposed civilian reformers who proposed a more humanitarian policy toward the Indians, though he did serve on the peace commission at the Medicine Lodge Creek (1867) and Fort Laramie Treaties (1868), respectively. On the other hand, he believed that the main cause of war was American expansion onto tribal lands, and that it was best, for all concerned, to force an end to the painful struggle by militarily controlling the tribes. Through it all, Sherman insisted that progress and order demanded that the Indians move aside for the white settlers, even as he recognized the unjust aspects of the fight. His love for the region never wavered, and he regularly left the frustrations of Washington to tour the Great Plains and the entire American West, where he found a peace of mind not available to him elsewhere. Sherman died in New York City on February 14, 1891.

Sherman Family Papers. Archives of the University of Notre Dame, South Bend IN.