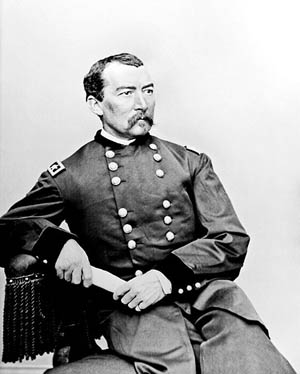 Philip Henry Sheridan, five feet five inches tall and unimpressive looking, was commander of the Military Division of the Missouri during controversial stages of Native American conflict with post–Civil War westward expansion. Sheridan was born on March 6, 1831, in (probably) Albany, New York, and grew up in Ohio. A rather undistinguished student, Sheridan graduated from the U.S. Military Academy at West Point in 1853 and served in Texas and the Pacific Northwest. He rose to the rank of major general by serving with distinction during the Civil War as commander of the Army of the Potomac's cavalry division. After the Civil War, Sheridan performed short stints in Reconstruction-era Texas and Louisiana before going to Fort Leavenworth, Kansas, in the spring of 1868. He was given command of the Military Division of the Missouri in 1869 and promoted to lieutenant general. In 1875 he would marry Irene Rucker, his quartermaster's daughter, and together they had four children.

Too few soldiers, many with less than desirable attitudes and character, too many forts to garrison, and too large an area to defend were just some of the problems confronted by the careful and deliberative commander. Directed by the "epeace policy" of the politicians, eastern philanthropists, and social reformers, Sheridan soon developed his strategy. He had two main principles for dealing with Native Americans, for whom he showed little sympathy. The first was to place all Indians on well-guarded reservations and have the U.S. government feed and clothe them. The second was to capture and punish any Indians found off their reservation. To institute this policy, Sheridan ordered a new type of warfare against Native Americans.winter campaigning. His offensive efforts, typified by Lt. Col. George Armstrong Custer's winter battle at the Washita River against the Cheyennes (November 17, 1868), proved successful. Columns of lightly supplied cavalry troops converged on the Indians in winter quarters, where they were immobile because of women, children, and weakened ponies.

Sheridan campaigned widely in the Plains in the 1870s, against the Lakotas in the Sioux War and against the Comanches, Kiowas, Southern Cheyennes, and Southern Arapahos in the Red River War. He was promoted to general in chief of the army in 1883 and general of the army in 1888. That same year, on August 5, he fell victim to a fatal heart attack at Nonquitt, Massachusetts.