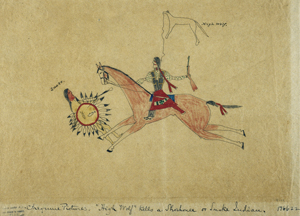 A depiction of counting coup

Counting coup, or striking an enemy, was the highest honor earned by warriors participating in the intertribal wars of the Great Plains. Native peoples recognized precise systems of graduated war honors, and usually the greatest exploit was counting coup. Key to a man's success in Plains combat was demonstrating his own courage by proving superiority over his opponent and, in a competitive sense, over his own comrades. Killing was part of war, but showing courage in the process was more important for individual status. This was best accomplished by risking one's life in charging the enemy on foot or horseback to get close enough to touch or strike him with the hand, a weapon, or a "coupstick."

Humiliating the enemy also played a part in this fighting, as illustrated by an account from the Jesuit missionary Father Pierre-Jean De Smet. In De Smet's 1848 visit to the Oglala Lakotas, the Oglala leader Red Fish related to the priest how his men had just suffered a disgraceful defeat at the hands of the Crows. The Crows killed ten Oglalas, then chased the others for a distance. The Crows then were content merely to repeatedly count coup on their enemies with clubs and sticks, thus demonstrating to the Oglalas that they were not worth the ammunition needed to kill them.

Counting coup carried over into the battles against American troops. For example, the Northern Cheyenne warrior Wooden Leg related how, as a young man at the Battle of the Little Bighorn, he and his friend Little Bird chased a soldier across the river, counting coup on him with their whips and grabbing his carbine. They did not kill him, said Wooden Leg, because after counting coup it did not seem particularly brave, and besides, it would waste bullets. Counting coup, then, was the epitome of a type of warfare that pitted the skill and daring of one man against another.