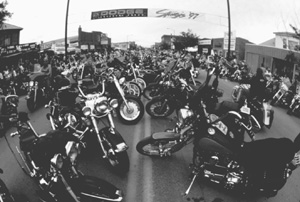 The Sturgis Motorcycle Rally, popularly known as Sturgis, is one of the largest motorcycle rallies in the world. The event draws its name from the town in southwestern South Dakota that hosts the event each year. This Great Plains gathering evokes memories of the fur trade rendezvous or the end-of-the-summer country fair and carnival, drawing people together for one more celebration before the autumn.

The first full week of August turns the sleepy ranching community of Sturgis into a motorcycle Mecca. Enthusiasts come from all fifty states and from around the world to attend the rally. For one week Sturgis is transformed into a large city in which all the inhabitants have one thing in common: motorcycles. Most people camp out in tents, and the traffic in Sturgis resembles Park Avenue in Manhattan. The motorcyclists come to Sturgis with their families and friends for many reasons. They are eager to find old friends, meet new ones, and share stories of the past year. They also enjoy examining each other's motorcycles. Motorcycling organizations sponsor races and tours through the nearby Black Hills, and motorcycle manufacturers host trade shows that provide a glimpse at the new model-year motorcycles and accessories. Sturgis attracts people from all walks of life to spend a week talking about their motorcycles and their motorcycling experiences and creates a strong sense of camaraderie and an amiable atmosphere.

The rally has reached epic proportions; during the fiftieth anniversary in 1990 an estimated 400,000 bikers attended. However, the beginnings of the Sturgis Motorcycle Rally are much more humble. In 1938 J. C. "Pappy" Hoel, a local motorcycle shop owner, encouraged his friends to come to town for two days of racing and fun. The first rally, sponsored by the local motorcycle club, the Jackpine Gypsies, attracted around eighty people to watch nineteen racers on a quarter-mile dirt track at the Sturgis Fairgrounds. The rally grew, based on word of mouth, encouraging its founders to extend the event and add additional attractions. During the 1980s an increase in motorcycle popularity produced a new generation of enthusiasts eager to experience the Sturgis Motorcycle Rally and races.

Motorcycle racing continues to be a focus at the rally, but Main Street is now the center of attention. The main thoroughfare through town is blocked to automobile traffic, and motorcycles are parked along each curb and two deep along the center line. Guiding their motorcycles through this narrow corridor, riders blast their throttles, releasing a deafening, ever-present thunder. While the street is the domain of the motorcycle, the sidewalks host thousands of vendors selling T-shirts and clothing, patches and stickers, motorcycle accessories, tattoos, food, beverages, and more.