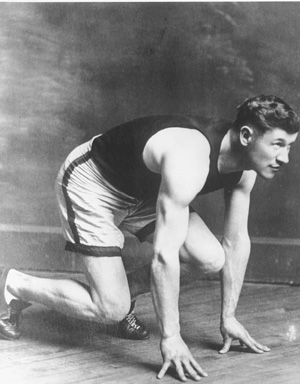 James Francis Thorpe, widely acknowledged as the greatest American athlete of the twentieth century, was born on May 28, 1887, near Prague, Indian Territory, in what is now the state of Oklahoma. His impoverished parents, Hiram and Charlotte Thorpe, were members of the Sauk and Fox Indian Nation. They gave their son the Native American name Wa-Tho-Huk, or Bright Path. To this day, Thorpe remains the only American athlete to perform at the world-class level in three major sports: track and field, baseball, and football.

Thorpe grew up hunting, fishing, and breaking horses with his twin brother, Charlie. Charlie died of pneumonia at age nine, and Thorpe came to believe he inherited a measure of his brother's physical energy and strength. Thorpe's mother died when he was a teenager, and his father subsequently sent him to the Carlisle Indian Industrial School in Pennsylvania, one of several schools founded by Richard Henry Pratt with the intent to assimilate Native American youths into European American society. After he enrolled at Carlisle, Thorpe returned to the Great Plains only intermittently throughout the remainder of his life.

While playing halfback for Carlisle, Thorpe earned football all-American honors in 1911 and 1912, leading Carlisle to the collegiate national championship in 1912. Although he did not become an official citizen of the United States until 1917, Thorpe was a member of the U.S. track and field team at the Olympic Games of 1912 held in Stockholm, Sweden. His gold medal performances in both the pentathlon and decathlon inspired King Gustav V of Sweden to remark, "You, Sir, are the greatest athlete in the world." Thorpe's gold medals were stripped from him by the Amateur Athletic Association when it was revealed that he had previously played semiprofessional baseball, but these medals were posthumously restored to him in 1982. It has been argued that the worldwide publicity inspired by Thorpe's accomplishments in Stockholm helped to ensure the future viability of the Olympic Games.

After his triumph in Stockholm, Thorpe signed a five-thousand-dollar contract to play baseball with the New York Giants. He played major-league baseball for seven seasons, with New York, the Boston Braves, and the Cincinnati Reds. In 1915 Thorpe agreed to play football for the Canton Bulldogs. He led Canton to unofficial world championships in 1916, 1917, and 1919. Thorpe went on to play football for an assortment of teams, including the New York Giants and the Chicago Cardinals. In 1920 he become the first president of the American Football Association, which later became the National Football League. After retiring from sports, Thorpe worked as an actor and casting director in Hollywood, lectured around the country on Native American culture, and during World War II served in the U.S. Merchant Marine. He died in his trailer in Lomita, California, on March 28, 1953. He is buried in the eastern Pennsylvania town that bears his name.

Thorpe was elected to the Pro Football Hall of Fame in 1963. In 1999 the Associated Press ranked Thorpe third on its list of the 100 top athletes of the century, behind only Babe Ruth and Michael Jordan. In the same year, both the U.S. Senate and the U.S. House of Representatives passed resolutions that designated Thorpe "American Athlete of the Century." Prior to the 2000 Super Bowl, ABC Sports honored Thorpe as "Athlete of the Century," and the National Football League renamed its most valuable player award in his honor.