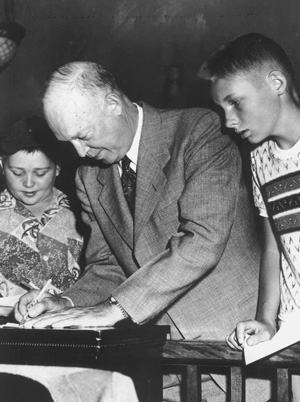 Dwight D. Eisenhower, the thirty-fourth president of the United States, was born in Denison, Texas, a town near the Texas-Oklahoma border, on October 14, 1890. He was the third of seven sons of David Jacob Eisenhower and Ida Stover Eisenhower. In the spring of 1891 the family returned to the home of their ancestors by moving due north to Abilene, Kansas, where Eisenhower's father worked in a creamery. Eisenhower graduated from Abilene High School in 1909. Lacking financial resources, Eisenhower went on in 1911 to the U.S. Military Academy at West Point, where tuition was free. Upon graduating from West Point in 1915, Eisenhower was assigned to training U.S. Army infantry troops at Fort Sam Houston in San Antonio, Texas. While stationed there, Eisenhower met, and in 1916 married, Mamie Geneva Doud, daughter of a prosperous Denver, Colorado, family. Together they had two children–Doud Dwight Eisenhower, who died of scarlet fever in 1921 at the age of three, and John Sheldon Doud Eisenhower, born in 1922.

Having been turned down for overseas duty several times, Eisenhower spent the World War I years moving from one military post to another. Luckily, while stationed in Camp Meade, Col. George S. Patton moved next door to Eisenhower and introduced him to Brig. Gen. Fox Conner, thus moving Eisenhower into the army's upper echelon. Eisenhower served on Conner's staff in the Panama Canal Zone, and Conner went on to support Eisenhower's admission into the Command and General Staff School at Fort Leavenworth, Kansas. Eisenhower graduated in 1926, first in his class of top army officers. He then served as aide to Gen. Douglas MacArthur, the army chief of staff, following him to the Philippines. When World War II broke out, Eisenhower was asked by Gen. George C. Marshall, who had replaced MacArthur as army chief of staff, to serve in the War Plans Division. Eisenhower went on to become commander of U.S. troops in Europe, head of the Allied invasions of North Africa, Sicily, and Italy, and in February 1943 was promoted to the rank of four-star general. Later that year, President Franklin D. Roosevelt named Eisenhower supreme commander of the Allied Expeditionary Force in Europe, and it was in this capacity that Eisenhower directed the largest seaborne invasion in history–the invasion of Normandy in northern France that came to be known as D day.

After the war Eisenhower returned home a five-star general and war hero. He replaced Marshall as army chief of staff in 1945 and directed demobilization efforts. In 1948 he retired from active military service to become president of Columbia University, and he published his account of the war, Crusade in Europe (1948), which became an immediate best-seller and made Eisenhower a wealthy man. Quickly leaving behind his career as an academic administrator, Eisenhower gladly accepted President Harry Truman's invitation to become supreme commander of the North Atlantic Treaty Organization (NATO) forces in early 1951.

Although both political parties tried to draft him as their candidate, in 1952 Eisenhower retired from the military after thirtyseven years of service and ran as the Republican nominee for president of the United States. In June of that year he defeated, with the help of a Texas delegation, the more conservative Sen. Robert A. Taft of Ohio for his party's nomination, accepted Richard M. Nixon as his vice presidential running mate, and later defeated Gov. Adlai E. Stevenson of Illinois for the presidency.

As president, Eisenhower was known for delegating power and forging a middle ground on policies, thus guaranteeing that he would be criticized by Republicans when he wasn't criticized by Democrats. As the first Republican president since Herbert Hoover, Eisenhower's domestic program, labeled "modern Republicanism," was designed not to dismantle New Deal programs but to hold them in check with Eisenhower's own brand of fiscal probity. He signed into law the Agricultural Act of 1956, which continued the system of flexible price supports, albeit at prices less than farmers wanted, and the Agricultural Act of 1958, which provided for a phased lowering of price supports. He supported expansion of social security coverage to millions of additional workers, including farmers, legislation to raise the minimum wage to $1 per hour while expanding its coverage, and he created the Department of Health, Education, and Welfare. And, although unsuccessful, he attempted to expand medical insurance coverage to the needy. While strongly supporting privatization, Eisenhower also obtained passage of two massive federal public works projects–the St. Lawrence Seaway in 1954 and the Interstate Highway System in 1956.

Although not an outspoken defender of civil rights, Eisenhower did much to advance racial integration. As army chief of staff and later as president he worked to integrate the army and the navy. He supported the Justice Department in its amicus curiae brief written in support of ending segregation in the Brown v. The Board of Education of Topeka case before the Supreme Court and, while refusing to publicly support the Supreme Court in its Brown decision, Eisenhower made good his promise to enforce the law by using federal troops to force school desegregation in Little Rock, Arkansas, in 1957. Eisenhower signed into law the Civil Rights Act of 1957–the first major civil rights legislation to be passed since the Civil Rights Act of 1875.

As a former war hero, Eisenhower could speak boldly of "massive retaliation" while working on the side of peace and conciliation. Eisenhower visited Korea and concluded a truce in July 1953, refused to commit U.S. forces in Indochina, worked to relax tensions with the Soviet Union, and did not intervene militarily when uprisings occurred in East Germany and Hungary. A stanch anticommunist, Eisenhower did not support the tactics of Sen. Joseph R. McCarthy but left it to others to publicly rebuke McCarthy. Eisenhower's anticommunist bent could be seen in his support of covert activities by the Central Intelligence Agency aimed at undermining the spread of communism abroad. When the Soviet Union successfully launched Sputnik I, the first manmade satellite to orbit the Earth, Eisenhower responded with another major federal initiative providing funds to increase the study of science in public schools.

Although his critics were numerous, Eisenhower remained popular with the American people and was reelected in 1956, despite his suffering a heart attack in 1955. He was above all a pragmatic president, preaching the gospel of a balanced budget but accepting quite often the reality of budget deficits, especially when the economy was weak. He was the oldest person to hold the office of president up to that time, the first president born in the state of Texas, and the first president to warn against the hazards of the military-industrial complex. Eisenhower left office in January 1961 and retired to a farm near Gettysburg, Pennsylvania, where he completed his memoirs. Eisenhower died on March 28, 1969, in Washington DC.

Ann Mari May University of Nebraska-Lincoln