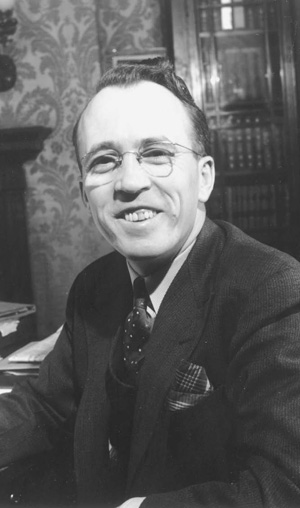 Thomas Clement Douglas was born in Falkirk, Scotland, on October 20, 1904. His family moved to Winnipeg, Manitoba, in 1919, where he witnessed the Winnipeg General Strike. After being ordained a Baptist minister in 1930, Douglas moved to Weyburn, Saskatchewan. Motivated by the widespread suffering he saw during the Depression, he decided to pursue a course of political activism.

Tommy Douglas was the most beloved premier in Saskatchewan history. He was a spellbinding orator with a ready wit, whose views were informed by the Social Gospel, the notion that people should create heaven on earth by helping others. He was opposed to doctrinaire socialism aimed at overthrowing capitalism; instead, he favored state regulation so that the "little guy" could compete against vested interests. He preached a liberal democratic philosophy based on individual rights, but more than others of his day, he also supported the collective rights of First Nations.

The Douglas government, though not without its failures, introduced reforms of seminal importance. It was the first in Canada to adopt a provincial Bill of Rights. Its social welfare legislation, based on human dignity, was the most enlightened of its day. It was the first provincial government to address the problems of Aboriginal peoples. And, over the objections of doctors, it created a provincial health care system that became a model for the rest of Canada.

In 1962 Douglas returned to the House of Commons in Ottawa to lead the New Democratic Party (NDP), the successor to the federal CCF. He surrendered the leadership of the NDP in 1971 and retired from Parliament eight years later. Tommy Douglas died in Ottawa on February 24, 1986.

Thomas, Lewis H., ed. The Making of a Socialist: The Recollections of T. C. Douglas. Edmonton: University of Alberta Press, 1982.