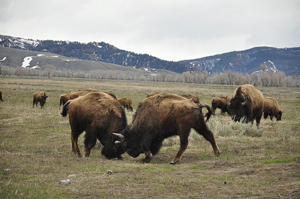 The North American bison (Bison bison) is the dominant symbol of the natural world of the Great Plains. Often referred to as "buffalo," the bison is actually the North American counterpart of a distinct evolutionary lineage stretching back into the Pliocene. While true buffalo are found in Africa and southern Asia, the closest living relative of the North American bison is the European wisent. Bison first appear in the fossil record in China and later spread into North America across the Bering Land Bridge into modern Alaska, reaching the Plains during the Middle Pleistocene (730,000 to 128,000 years ago).

The modern male bison stands roughly six feet tall at the shoulder, is about nine feet long, and weighs 1,800 to 2,000 pounds. Females are smaller, averaging about five feet at the shoulder, seven feet in length, and 700 to 800 pounds. Both sexes have fairly short horns that curve upward and inward, and massive heads and forequarters with a large hump just behind the head, along with relatively slender hips and hindquarters. The bison's thick coat insulates it against Plains winters, and its powerful head and neck allow it to dig through snow for winter forage. As individuals, bison (particularly males) are unpredictable and often aggressive and have been known to attack humans. However, they are extremely social and react more predictably in herds: in particular, bison bunch together and stampede as a group in response to even slight provocations. Bison are built to run, with males clocked at speeds of thirty miles per hour; a bison can canter far longer than a horse.

Bison herds on the Plains today live in limited areas, including national, state, and local parks and private ranches. Most herds are also managed, to some degree, through selective slaughter and provision of winterfeed. Bison, however, once ranged from northern Mexico to Canada and from Nevada to the Appalachian Mountains, and bison numbers and movements in this vast territory were determined primarily by the natural distributions and amount of forage, water, and winter shelter.

For much of the year, females, calves, and adolescent males tend to form "nursery" herds, separate from "bull" herds comprised primarily of adult males. Both nursery and bull herds form cohesive, hierarchically organized social units, with social positions determined by the outcomes of dominance fights in which pairs of bull bison clash their heads together and attempt to knock each other off balance. Although there are few records of bison herd sizes prior to the nineteenth century, bison probably dispersed into their smallest social groups in winter and early spring when food was least abundant and nutritious. Winter herds may have been larger in the north as animals sought out limited sheltered areas to escape wind and cold. Maximum herd sizes were probably no larger than 10,000 to 20,000.

In unmanaged modern herds too, late winter and early spring are hard times, and "winterkill" resulting from old age, starvation, predation, and exposure limits population increase. Calves are born in April and May. Throughout the Plains, bison aggregate into larger herds during the summer and early fall, when the Plains grasses grow best and provide the highest nutritional yield. Herd sizes particularly increase in late summer, when nursery and bull herds combine for the annual rut. During the rut, fights between males are nearly continuous because victorious (or dominant) males have preferential access to females.

Modern bison and their habits resulted from a long process of evolutionary change. The earliest North American forms (Bison latifrons) were much larger than the modern species and had much longer, straighter, and sharper horns. Trends toward smaller bodies with more modern horns were accompanied by skeletal changes in the head and shoulders over time, indicating increasing strength and a greater ability to bear the shock of collisions in dominance battles. Taken together, these changes (particularly the shift to a less lethal horn configuration) imply that dominance clashes became more common, apparently because of increasing herd sizes. These trends reflect changes in the adaptations of the bison, probably caused by alterations in the Plains environment. Bison originated as a forest species and probably lived in small social groups, with dominance fights rare and, given the lethal design of their horns, probably often fatal. The Pleistocene expansion of the Plains grassland and decreasing forage production due to increasing aridity within the last 12,000 years probably favored smaller animals living in larger herds, thereby increasing the frequency of dominance fights and evolution of less dangerous fighting apparatus.

Humans have also profoundly influenced the Plains bison. Native Americans hunted ancient and modern bison for at least 12,000 years, stalking individual animals or slaughtering entire herds by driving animals over cliffs or into corrals or other traps. Within the last 1,000 years, hunter-gatherer groups throughout the Plains hunted both for their own needs and to produce a surplus for trade with their agricultural neighbors.

In the first half of the nineteenth century the fur trade provided a new market for bison robes, and hunting increased significantly. After about 1850, railroad construction, population expansion, and increased commerce in bison hides accelerated the rate at which bison were slaughtered. Bison were also adversely affected by increasing competition with European American and Native American horse and cattle herds for limited winter forage and by cattle-borne diseases. Ultimately, these forces reduced an estimated population in the early nineteenth century of 30 to 50 million animals to fewer than 1,000 by the 1890s.

Bison populations now total some 70,000, thanks to efforts by government agencies and private groups like the National Bison Association and the InterTribal Bison Cooperative. Private groups are particularly motivated by a growing market for bison meat, which is lower in fat and cholesterol than beef.

Douglas B. Bamforth University of Colorado