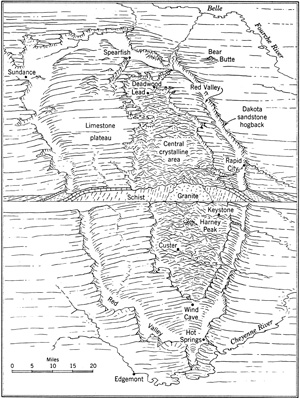 The Black Hills is an eroded structural dome in northwestern South Dakota and adjacent northeastern Wyoming. Elevations range from about 3,500 feet along its margins to 7,242 feet on Harney Peak near the center. The dome has eroded Precambrian crystalline rocks (granite and schist) exposed near its center, as at Harney Peak and Mount Rushmore National Memorial. Younger rocks lie outward from these. Among them, soft shales form valleys, whereas resistant rocks, such as sandstones and limestones, form plateaus, hogbacks, or homoclines. Paleozoic limestones, principally the Minnekahta limestone (Permian), overlie the crystalline units and form the Limestone Plateau that covers much of the western half of the uplift. Outward from the Paleozoic beds is the Spearfish Formation (Triassic) that forms the Red Valley (or Racetrack) that entirely rims the edges of the Black Hills. Next, the Dakota Sandstone (Cretaceous) forms a prominent hogback encircling the uplift. Late Mesozoic and Tertiary beds comprise the plains beyond the hogback.

Limestone caverns are common on the Limestone Plateau, as at Jewel Cave National Monument and Wind Cave National Park. Hot springs occasionally occur along the margins of the uplift, as at the town of Hot Springs, South Dakota. Numerous laccolithic peaks (caused by volcanic intrusions) lie north and west of the uplift in South Dakota and Wyoming, including Elkhorn Peak, Crow Peak, Crook Mountain, and Citadel Rock. Devils Tower in Wyoming (a national monument) is a volcanic neck and Bear Butte in South Dakota is an igneous plug. All these volcanic features are Tertiary in age. Gold deposits in the Black Hills are associated with the Tertiary volcanism.