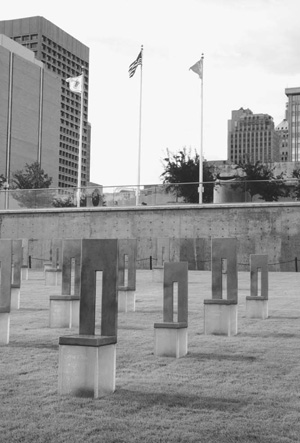 The bombing of the Murrah Federal Building in downtown Oklahoma City at 9:02 on the morning of April 19, 1995, created emotional, social, and political shock waves that reverberated throughout the Great Plains and beyond. The deaths of 168 people and the wounding of more than 674 tragically confronted heartland residents with the reality that they were not immune from the violent forces they had mainly perceived as an abstraction.

Previous outbreaks of violence associated with controversial social and political issues had been minor in the Great Plains. The bombings of abortion clinics were a continuing threat in the region, but loss of life and property were limited. In fact, under the criteria of the Department of Justice, such acts were not regarded as terrorism. However, the seeds for discontent continued to be sown as a result of the crisis in family farming and the closing of smokestack industries. That discontent was channeled and manipulated by the militia movement into a distrust and hatred of government, especially federal government. The discontent was greatly magnified by the deadly operations led by the Federal Bureau of Investigation against Randy Weaver and his family at Ruby Ridge in August 1992 and against the Branch Davidian compound near Waco, Texas, on April 19, 1993. The Waco siege had a very personal meaning for Timothy McVeigh, whose visit to the site contributed to his rage against the government, a rage that would be directed at the Murrah Building.

On the morning of April 19, 1995, an air of normalcy marked the beginning of another workday in Oklahoma City and the surrounding communities. The weather, while a little chilly, served as a reminder that spring had finally come to the Plains. Watercooler discussion focused on the continued revitalization of the downtown former factory area known as Bricktown and the prospects of the local triple-A baseball team. But all this would change at 9:02, when a massive explosion rocked the downtown and sent destructive shockwaves over a two-mile area. The explosion could be heard twenty miles away. Initially, those who were not on the immediate scene attributed the explosion to a sonic boom from a military aircraft at Tinker Air Force Base in Midwest City or a gas explosion in one of the abandoned buildings in a decayed area near downtown. Even when the first pictures were transmitted by the local news helicopter a few minutes after the bombing, the source of the explosion was uncertain. The on-air pictures of the smoke and chaos at the Murrah Building obscured what had happened, even as survivors, bystanders, and first-aid workers sought to initiate rescue operations. It soon became clear from the destruction of the building that Oklahoma City had been subject to a terrorist attack.

Initially, the bombing was attributed to a Middle Eastern terrorist organization. First, a former Oklahoma congressman, with ties to the intelligence community and law enforcement in Washington DC, maintained that officials had indicated to him that a foreign group probably initiated the attack. Terrorist experts who appeared on network television largely shared this "conventional wisdom." Second, there was a state of denial that Americans could have engaged in such carnage against their fellow citizens. This changed with the capture of Timothy McVeigh, but a knee-jerk prejudice was one of the community's first responses to the bombing.

More impressive was the way the community assisted the survivors, their families, and the victims' families. The first responders, including the fire department, the police, and health-care professionals, helped to establish what is now called "the Oklahoma Standard" in dealing with mass destruction. Soon, support became national in scope, as rescue units from around the country converged on Oklahoma City.

The Oklahoma bombing entered a new and still ongoing legal phase with the capture, trial, and execution of Timothy McVeigh and the continuing disposition of the Terry Nichols case. Now almost ten years after the bombing, the inhabitants of Oklahoma City face the challenge of remembering and memorializing the victims and survivors without continuing a cycle of victimization. The Oklahoma City National Memorial is not only a powerful symbol of remembrances but has also become a leading tourist destination in the region. In addition, the Oklahoma City National Memorial Institute for the Prevention of Terrorism was established to study terrorism as well as train first responders to deal more effectively with future incidents.