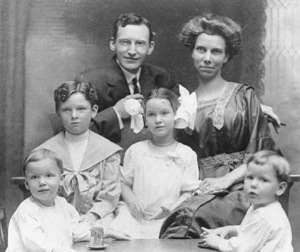 Born on March 26, 1876, in Ottawa County, Kansas, Kate Richards O'Hare was one of the most popular lecturers, journalists, and socialist reformers of the first decades of the twentieth century, with her strongest support coming in the Great Plains and the Southwest. She was the daughter of Kansas homesteaders who lost their land in the late 1880s and relocated to Kansas City, Missouri. Educated in Kansas, Missouri, and Nebraska, Kate taught school briefly, then turned to temperance and missionary work. Disillusioned, she became a machinist in her father's shop, which introduced her to the labor movement. In 1901 Kate enrolled in a socialist program in Girard, Kansas, a hub of socialist activism and the home of the newspaper Appeal to Reason. She became an organizer for the newly founded Socialist Party of America and, with her new husband, Frank Patrick O'Hare, went on the road to spread the word of socialism.

For five years the O'Hares and their four children homesteaded in Oklahoma Territory, which was then beginning to develop one of the fastest-growing socialist movements in the United States. Kate wrote for the regional socialist press and became the most popular local speaker at the socialist summer encampments in the Southwest, which featured nationally known lecturers and drew thousands of farmers. In 1909 the O'Hares relocated to Kansas City, Kansas, where Kate was a candidate for the U.S. House of Representatives in 1910. Thereafter, they settled in St. Louis, Missouri, where she became a staff writer for the National Rip-Saw, an agrarian socialist monthly, alongside her close colleague Eugene Debs.

As a socialist, O'Hare advocated peaceful means to achieve a collectivist system, promoting electoral activity, mass education, and reform measures. In the Socialist Party, she was the voice of the farmers of the Great Plains, one of the few party leaders who understood intimately the farmers' struggle with increasingly overwhelming economic forces. She introduced an agrarian plank to the party's platform and tried to expand its definition of the proletariat to include farmers. Meanwhile, O'Hare toured constantly on the socialist lecture circuit, with her spring and summer itineraries spanning the Dakotas through Texas and Oklahoma.

During World War I O'Hare upheld the Socialist Party's opposition to the war. She was found guilty of violating the Espionage Act for an antiwar speech she delivered in Bowman, North Dakota, in 1917 and served fourteen months of a five-year prison term. Thereafter, her activities focused on penal reform and labor education. In 1928 she divorced O'Hare, and that year married Charles C. Cunningham, a businessman, and gradually abandoned her activism, although she continued to lecture on civic issues until the end of her life. She died in Benicia, California, on January 10, 1948.